While many of my friends and family were tuned in for updates on the royal wedding this weekend, I was trying to figure out how I would soon have to explain to them why there won’t be another one in July, why Prince Charming is moving to Germany alone, or why I hesitantly slipped off the ring that, for a season, dubbed me a princess, returning to the pauper-dom of schoolteacher simplicity in my rented house where I can hear each play narrated from Darling Stadium as the field lights carry the announcer’s voice to the foot of my front porch.

My parents think I’m crazy.  I don’t blame them.  Charming is still the fulfillment of every adolescent, innocent wish for the husband of my dreams.  I fell in love with him almost immediately, and he would be my purpose before long.  So immersed in our possible future, I straddled Virginia, living with one foot in Hampton and another in DC, hoping that he would be the father of my children… wanting those genes to mix with the Palma family’s and produce brilliant, Type A worldchangers who feared God.

Yet, even as I dreamed, I battled for balance with the part of me still planted in Hampton.

I say this now as if I were conscious of the divergent path I took to distance myself from Charming and ultimately hurt him enough to finally move forward with his life with a clear conscious, unburdened by any further responsibility to me.

I wasn’t aware.  I’m not even sure I’ll connect the dots right.  I haven’t spoken to my parents since the decision to cancel the wedding was made.  They are in shock… and not that the marriage is off, but that my choices made it an inevitability.  From the day that Charming proposed, I’ve dismissed this nagging sense that I am caught up in a current pulling me ferouciously toward the future that I always wanted.  I ignored the discontent I sensed in my relationship with the man I loved because I should have been grateful.  He is perfect in all the ways that matter.  A friend told me that if I didn’t marry my prince now, I’d regret it for the rest of my life.

And maybe I will. All I know is that if I trace my path from engagement until now, I was clearly dragging my feet.  Wedding preparation hiccups felt like mountains.  Wedding planning with Charming felt like military strategy sessions.  I had no sooner survived the application process to Northern Virginia than we were suddenly moving to Germany.  Mom fanned my writer’s flame, and I held tight to the realization of the financial freedom to live abroad, to research and write my family’s story in Italy.  Charming and I were perfectly suited for each other.  Our families have fallen in love faster than we did, even.

So I can understand why someone might drop in for this particular blog post and wonder how this could possibly be the end of our story. In fact, several faces come to mind, and I’m picturing the horror, shock, disappointment, perhaps even the judgment and wrath morality dictates flickering in your eyes.

How do you live with yourself after you realize that you chose to avoid reality, to drag your feet while moving ever closer to a future you’re not ready for any more, to pull away from the greatest man you’ve ever known until his company no longer makes you smile.  Regardless of the myriad obstacles that plagued us, when my grandmother died and it was time to head north for the funeral, I wanted to go alone.  I should have faced it then, but we were so deep in that it seemed logical to continue in the darkness with the decision we had made in the light.  Amongst all my family members, Charming fit better than I ever had.  When a limited edition comes your way, you don’t put it on consignment.

No, I didn’t have the guts.  I kept dragging my feet.  A W. B. Yeats poem echoes quietly, “Turning and turning in the widening gyre / The falcon cannot hear the falconer; Things fall apart; the centre cannot hold.”  The rising temperatures only turned up the heat on my disillusionment with our coming nuptials.  Instead of admitting second thoughts or hesitations, I let the current keep pulling me forward.

Charming and I would never be a team after my grandmother’s funeral.  The realization that I was not happier with him was quickly squelched as my mother embraced her future son with a joy in her eyes I’ve never seen before connected to a man that I’d chosen.  I thought perhaps this season was like a slingshot, being stretched back almost to breaking so that I could catapault into my happily ever after with my prince.

Charming offered me the fulfillment of every dream I’d ever had.  And it wasn’t enough.

I’ve had ups and downs in my faith journey enough to recognize them and anticipate God will draw me back to Himself, but if it takes a couple of years like it did when I left my ex-husband, it will certainly be too late for that suburban family picture I’d so vividly painted as a child that it’s etched behind my eyelids.  Charming would have given up Germany, postponed the wedding, even moved to Hampton to make me happy.

It wasn’t until I was sitting face to face with a close friend at school, having just come clean about every stupid choice that led to another lie and another deception until I had systematically accomplished my unconscious goal: Charming owes me nothing, that his incredible character, commitment, dedication, and sense of responsibility do not have to extend to me.  He’s free to start over and find a career woman who fears God and carry the torch.  I can only hope that my betrayal doesn’t prevent him from trusting her and building a team that works well together.

Things fell apart.  The center couldn’t hold.  I didn’t do it on purpose.  It wasn’t clear.  It wasn’t intentional.  I just kept doing what I knew I should do right up until I’d broken Charming’s heart.  Deep down, I knew the consequences of my action would dismantle any modicum of happily ever after that we might have found together with a fresh start in Germany.

Quieting that still, small voice in January was the beginning of the end for this ride into the sunset.  No, I didn’t want this to end, and yes, I did love him, but somewhere over the course of two and a half years, I’d also bridled that sassy, free spirit.  No amount of resentment for the waiting and deliberating that preceded Charming’s proposal nor for his expectations for the chameleon colors I’d shown him could begin to justify the way that I would come to hurt him.

I pass the same trash heap every day.  It grows outside the cafeteria doors.  Broken chairs and discarded pallets litter the pavement, and I ignored it for more than three years. After deciding the theme for our wedding would be “#ANewThing”, I opted to find trash that we could transform into decorations.  I’ve been pilfering discarded pieces from the pile for the last few months, picturing the new life they would find with the right stain and chosen message to scrawl in fancy letters.

On Monday after lunch break, I walked by that old trash heap on the way in to pick up on our career discovery adventure quest with my sophomores.  I’d just received confirmation that I did not sign my continuing contract in time.  I was literally a day late.  I’ll have to reapply to the district.  I don’t have a job for next year.  Kids wandering between classes might have wondered at me standing there beside the trash bins, almost admiring the brokenness.  I still see what they could be.   Redeemed. 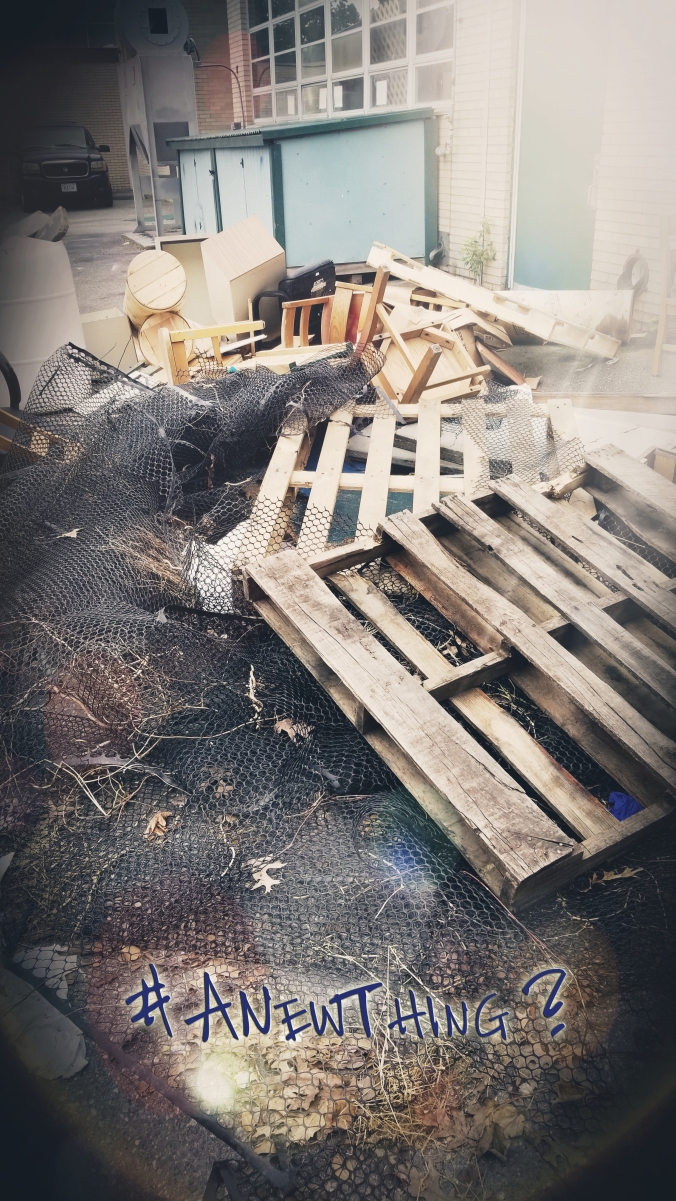 Last summer when Charming proposed at Fort Monroe, I thought it was the beginning of happily ever after.  The sun sets.  The sun rises.  And as the sun glittered on shards of glass, I saw beauty in the broken pieces of my childhood dreams.  I was standing still for the first time in years, two feet firmly planted in Hampton Roads where I have Tuesday night dinners with my brother’s kids and Thursday date nights at Marker 20 with Angel and hear the cheers sneaking up the street on writing night to keep me company.  I’d destroyed my best chance at forever with Charming, but I was free to stand among the trash heap no longer crawling in my skin from the lie I’d been living.  Best intentions mean little after you break someone’s heart.

We wanted our wedding to be a celebration of the way that God redeems, restores, and renews.  How can this premature end become one of those blessings that comes through raindrops, for Charming or for me?  I don’t know.  I didn’t write this story, and I won’t write that one.  An apology is too small a gesture for a prince, though he did not withhold forgiveness.  Character.  Integrity.  I know I’m letting go of a limited edition.

What I do know tonight is that had I been brave enough to face the disappointed Charming’s fans when that tiny voice begged recognition, I might have spared his heart.  Walking away from the trash heap to teach what still might be my last unit at Kecoughtan, I was surprised to find that I was somehow smiling after the dust cleared.  Because really, I was standing still.  The current stopped pulling.  There is no storm, no widening gyre.

Maybe Fort Monroe sunsets stole my heart be fore Charming did.  Maybe I’ll die an old maid.  Maybe lots of things.  But one thing is obvious long after the sun has set: I am still and at peace, and I can only identify its presence because of the weight lifted in its absence.