Tonight, I’m writing from my typical perch, but within a winter wonderland. On Saturday, Charming drove a quarter of the day to spend half the day tangled up in Christmas decorations with me. Accompanied by my iTunes Christmas playlist recently modified to include some of his favorites, Charming balanced on a ladder to hang icicles from the roof and put the star on top of the tree; I’ve always thought those traditions were best suited for a man. 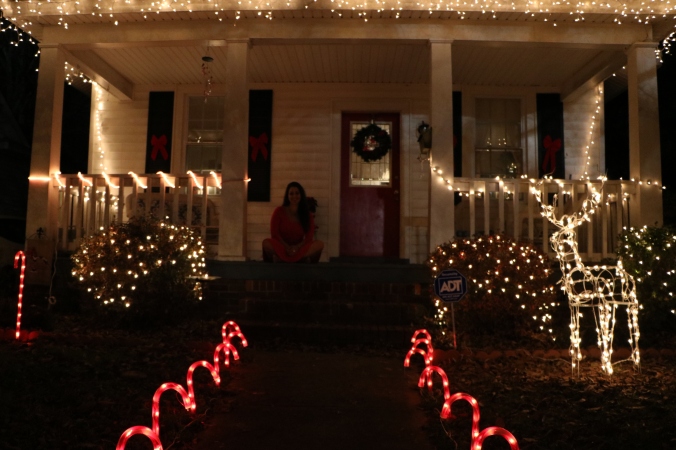 Pursuant to my vision for preservation of ten years of tradition, we headed to Home Depot upon his arrival to secure a fat Frasier Fur. Having always picked out my tree the day after Thanksgiving, I hadn’t anticipated how slim the pickings would be a week later. I had a good excuse. In any case, I had helped Charming do the same instead, and he was now returning the favor. It was worth abandoning tradition.

The friendly young man who patiently assisted us during our perusals of the trees explained that there weren’t any fuller trees left and suggested we would fare better at a nearby church. Ever a creature of habit, I stuck to my guns, so eventually Charming helped coach me toward a choice on the lot.

The day could add a few scenes to the Hallmark Christmas movie script we might as well as have been writing the weekend before. I was excited to reclaim memories and intentionally live new ones. More specifically, I was excited to share this day-venture with Charming. Packaged into a brief window amidst the unmistakably less anticipated wealth of days apart, we transformed my porch into the North Pole, resurrected a slender tree into a brilliant masterpiece, enjoyed a romantic dinner out, and cuddled up with Netflix to recover before his drive home.

As the streamed episode came to a close, I was a little teary-eyed, which surprised me. After all, I’m visiting Charming this weekend, where he’ll take me to a black tie gala to help me cross number 25 off my list of Thirty Things to Do in My Thirties. It’s like a fairy tale, right? Evening gowns and bow ties and glittering jewelry and dancing with a prince. Almost too good to be true.

And that’s why I was misty-eyed. This is good. So good. My tenth graders have been studying dramatic comedies, analyzing the typical plot: boy meets girl, boy loses girl, boy wins girl, usually ending with a wedding. We just finished reading a one-act play where the main characters overcome an intense conflict and fall in love by curtain close. I think Charming and I would make for a good romantic comedy, but the real-life version will likely require a lot more acts and scenes before we either reach the dénouement or discover it’s not a movie worth making.

Dramatic plot structure differs from the traditional bell curve, devoting the majority of the plot to developing conflict and building complications, peaking only briefly into a climax and equally brief resolution. Within the complications is where I reside, fear and hope battling one another for supremacy. I’m trying to write another song, but what if the ability won’t bypass a half dozen years neglected? I want to buy a home, but what if I can never save enough to afford a down payment? I dream of having a family of my own, but what if that’s not in God’s plan?

While chatting with a colleague today, I learned that the Christmas tree selection at the aforementioned church was excellent. There were hundreds of fat Frazier Furs.   I had a choice on Saturday to stick with tradition or try something new, and I opted for the familiar. I couldn’t have known for certain that venturing up the road would yield any better results, and it was safer to operate within established tradition.

But that’s the thing about traditions. You don’t ever know when you’re establishing them, not the first time around. It’s only in the years to come, as rituals are repeated, that you recognize them as anticipated staples in your holiday season. Once cemented, these once simple actions take on symbolic significance as you recreate the joy shared in the original moment.

I am loyal to a fault. Michelle has cut my hair since I was four years old, while living in four different states. We’ve traded hundreds of deep conversation over a pair of salon sheers. I know her. I trust her. Home Depot has provided my Christmas tree for ten years, while living in three different states. They’ve always ensured my tree made it home on top of my car. I know them. I trust them.

Hope battles fear most passionately when trust and familiarity are absent. I’m in unchartered territory with Charming. My track record taunts me. Another man drove hours to spend a day with me, but other truths shattered the trust in good intentions affixed to the gesture. For as long as I can remember, I’ve held to the adage, “Hope for the best; expect the worst.” At what point did I subconsciously replace “expect” with “fear”?

I’ve concluded before that hope is fear’s adversary. There’s hope in Christmas traditions. When I chose to delay my normal decorating routine to spend the weekend with Charming, I wasn’t necessarily abandoning tradition. I was altering it to make room to establish new traditions. It’s the joy of the moment that makes it worth repeating. And standing in the street together after night fell, taking in the beauty of my winter wonderland bungalow, you could have convinced me that would be one of them.

Sitting here amidst the twinkling lights, fingers nearly numb from the cold air, wisps of hair sneaking out from Charming’s hoodie, I can picture him on the ladder Saturday, doing manual labor because he knew it would make me happy. If the central conflict in this romantic comedy is between fear and hope, that picture begs me to put on rose colored glasses and ride out the building complications for at least another act.

The further we progress through life, the more baggage we accumulate. They weigh on us, play on our sentiments, toy with our memories, influence our choices out of fear that we’ll unexpectedly add another suitcase.

But the further we progress through life, the more traditions we also establish. They surprise us, sneak into our purview, delight us with unexpected, cherished additions to a holiday season. Snuggling up with Charming by the light of the Christmas tree, no other memories or traditions competed for my attention. I felt hope. And it scared me.

It doesn’t matter that the tree isn’t fat – it’s the most beautiful tree I’ve ever had. This is good. And it’s true right now. I wouldn’t dream of fast-forwarding through our story to discover if it’s a comedy or a tragedy. The brief climax and resolution of the dramatic plot structure are only meaningful because of the time spent building up to them.

One thought on “Hope in Traditions”