I drove up to spend Thanksgiving weekend with Charming. Despite the standstills of holiday traffic, I was beaming as I snapped a selfie to let him know I was on my way. The genuine smile anticipated the romantic walks hand in hand around his quaint old town, meals served with scintillating conversation, the honor of meeting the family of a man I’d come to admire, and all the tiny moments of words and looks exchanged that would, undoubtedly, hijack any prospect for logical reasoning in his presence. 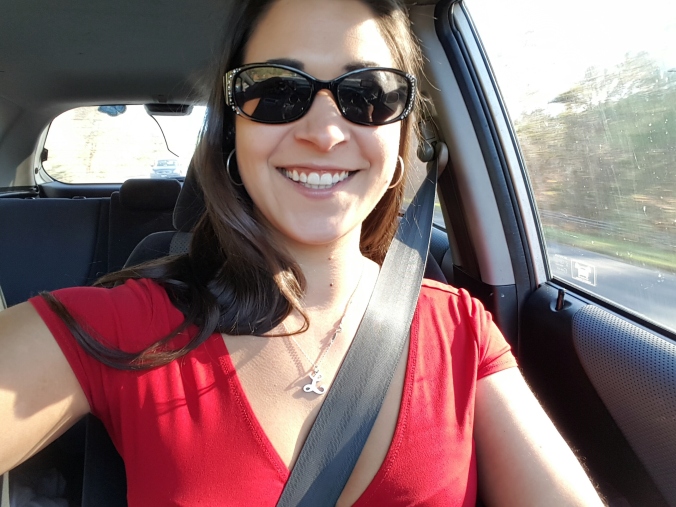 That smile graced dozens of little dates strung together over five days. There was a perfect balance of reclaiming memories and making new ones. Thanksgiving has a place at the table of our lives. We all have our own traditions. I remember a Thanksgiving with my ex-husband’s family that found me crying outside on the driveway, back to his sister’s garage. They had argued with me that education was not important. I took it personally. Education was, after all, my passion.

It’s ironic then, that I stopped reading theology books and picked up binge-watching TV series. In the time that I used to write music and poetry, I did jigsaw puzzles and played solitaire. I was fully immersed in Hispanic culture, and always a strong actress, I learned to play the role of a Latina wife. Our friends would call me the “casi-Latina” – almost Latin girl. There are two problems with that: my life is not a play and I’m Italian. I became what I thought was needed to please my husband and his family.

My mother has admitted that for several years, she believed she had lost me to another world. We didn’t talk much, and I only visited from Nashville once a year. Though it pains me to admit it, retrospect focuses in on the out of sight, out of mind cliché. My decision to go to grad school was in part an attempt to recover some of what I was deep down: an academic, a deep thinker, an over-analyzer, a Type A perfectionist… a doer.

I’d rather engage in literary banter than watch a family movie. I’d rather be in the kitchen prepping and cleaning than taking that post-Thanksgiving meal nap. I had the opportunity for both preferences at Charming’s parents. His grandmother intrigued me most. She’s a feisty woman in her nineties with a legacy of varied experiences, extensive travel, and proof of intentional living. I could have listened to her stories all day. She caught my eye when I was cleaning up and said, “It’s nice to have a doer.”

It’s nice to be one again. My mom and I talked for nearly three hours as I drove back to Hampton after my long weekend away. Topics varied from spiritual to conceptual to personal. I barely noticed the drag of the 0-20 mph that commanded the bulk of the trip. I told her about the sermon at the church we had visited that morning from her favorite passage, Colossians 1.

13 For he has rescued us from the dominion of darkness and brought us into the kingdom of the Son he loves, 14 in whom we have redemption, the forgiveness of sins.

The message was that God will remake us to what we always should have been. When I consider the journey of holidays, the shifts in what I have been grateful for, the accumulation of traditions, the additions and deletions to those present at the table, I’m struck by the transient nature of my last decade of existence. These came before I married, after I married, after I divorced, after I moved here. I made memories that were either later tarnished or sorrowful in the moment.

My writing doesn’t pivot on the premise that there’s life after divorce, yet the redemptive thread woven through a weekly tapestry of my growth is unmistakable. I see God’s hand in what I considered to be a new beginning. He rescued me from darkness. That’s unmistakable. Might it be there’s a deeper story being written? That in this chance at new life, God is remaking me into what I always should have been?

Charming is playing a role in this story, though I’d like to believe he’s not just acting. The practice of reclaiming memories for ourselves is reflective of a desire to be remade. A shot reel of our weekend together would easily provide the storyboard for a Hallmark movie. For me, reclaiming a memory means replacing a tarnished or broken one with something positive.

We’ve been using a series of thirty-some published questions to engage in exploratory dialogue designed to convene within ninety minutes. We average about three questions in that time. I appreciate that we’ve emphasized honest disclosure because I’ve been able to process past experiences in an alternative platform. Writing about it to a computer screen is less intimidating and less intimate than looking into the eyes of someone you hope will still like you after you finish talking, and you file away the memory explored with a slightly improved disposition.

God uses my students in this story, too. With each sweet sticky note from a handful of my sophomore girls added to a growing collection around my desk, I’m reassured that I was born to teach, that my presence in my classroom is a fulfillment of my purpose, that for me to have ever willingly walked away from my profession simply evidences a temporary identity crisis. Like Charming, they influence my perception of the world and expand my worldview. I love lesson planning. It’s like that drive up to see Charming. It’s filled with the anticipation for the discussions the lesson will facilitate and the rare gems of insights my students will mine. I still miss my old school in Nashville, but that’s no longer accompanied by feelings of regret.

When I walked Charming’s grandmother out to the car after the festivities were over, she told me firmly, “You should stick around,” followed soon after by, “You fit right in here.” I’d like to stick around. The running catalogue of holidays past could use more like this one. I felt like I fit in, and that was an exciting realization. Because I was myself. I wasn’t acting out a role. I was doing and being me. And it was such a relief. I could relax making crescent rolls and flipping through his childhood photo albums and listening to his father speak passionately about his work and washing and drying the dishes together.

Charming’s role might just be a supporting character, the kind that’s used to build up the transformation of the protagonist. In that case, it’s possible the memories we’re reclaiming together will have to be reclaimed again someday. Still, our Hallmark weekend was filled with tiny moments of words and looks exchanged that undoubtedly hijacked any prospect for logical reasoning in his presence.

We’re not just making memories. We’re living. Intentionally. A bucket list is about experiences, not checkmarks. I smile in anticipation of the story God is writing to remake me into what I was always supposed to be, weaving a redemptive thread through the tapestry, extending forgiveness for the past and hope for the story yet to be told.

One thought on “Smiling in Anticipation”