I invited the rain to accompany me for writing night.  It declined.  Instead, I type into the calm comfort of an October in Hampton Roads.  The stillness is punctuated only by the scent of my neighbor’s cigar and his R&B mix drifting over from next door.  I crave the quiet.  I prefer it, certainly.  Yet, I consider it writer’s growth that I’m not camping out on the back steps wishing things were different.

I’ve spent a lot of time wishing things were different, but I’ve never changed a moment in history.  My life stands full of new beginnings that were preceded by drastic failures.  I’m alive.  I’m here.  I’m waking up.  I’m working. I exist, and that requires survival, so I keep going through the daily routine.  It would be easier to still my soul if I could rest in the assurances my childhood faith provided.  Absent that foundation, everything feels like it’s falling apart.

Granted, that’s just a feeling.  Hating the drive to work didn’t make it any shorter.  It’s actually quite beautiful crossing the water after sunrise.  Often, I’ll leave Hampton, and by the time I’ve emerged from the bridge tunnel on the other side, the weather is completely different.  I think I remember learning that it takes thirty days for something to become a habit.  I don’t hate the drive to work anymore.  I stopped wishing things were different.  I accepted the interruption to my preferred plan before or after it became a part of my new normal.  It really doesn’t matter when.

Six months ago, it wasn’t just my relationship with Charming that fell apart.  I imploded.  I never returned to a normal routine.  There was no normal to return to.  Since then, I have been, essentially, rebuilding my life from the ground up.  The major problem there is that I haven’t found another foundation to replace the one I surrendered.  There were “Why’s?” before… but they were fewer in number.  I am quite certain I was the only one at my grandmother’s funeral who was mourning the loss of the coping strategy heaven used to be.

It’s never been safe to ask: What if there is no heaven?  Even in June, I couldn’t have asked it. I was still too programmed into protecting myself from shame or embarrassment. I teach teenagers to follow certain guidelines in what they choose to publish on the internet; would I be so reckless as to blog about my life or someone else’s if the public, permanent presence could do damage?  Yes, even in June, I was too scared to be myself, too scared to ask the what if’s?  I don’t know what to believe about heaven or hell.  I can’t change history.  I wake up and work, and I’ll do it again next week.  I share this, publically, because it is my story and my truth.  I can be most honest about events which concern me.

I’ve been trying to focus there in recent weeks in an attempt to fight the self-imposed writer’s block of avoiding telling other people’s stories. Over the years, I’ve written honestly about experiences where eight different people were involved and eight corresponding versions of the truth.  Recently, I’ve respected confidentiality when people in my actual life don’t wish to enter the annals of blogs, and thought it’s been difficult to navigate, I’ve experienced tremendous growth as a writer plowing through blocks that exist because what I write should promote growth, not disparage or expose.  It didn’t happen right away, but I’m finding a new normal in my weekly blog as well.

Don’t be distracted by the cute pictures of me with babies or food or nature.  You’re reading along on my journey to find my way back to life again.  You might miss the confidence, the faith, the hope, the story of falling in love and a promise of happily ever after… but you’re getting a deposit of authenticity each week.  I’m living.  I have it better than a lot of people.  I don’t expect or deserve more.  I wake up five days a week and focus on living my life now, seeing the sea of young people in front of me, and finding comfort in the reality that they are growing as writers and thinkers.

Much of my free time this past week has been devoted to grading personal narratives.  One of my AP kids chronicled succinctly within page requirements about how she came to terms with death’s inevitability.  I’d been grading for hours when I got to this one, and as she described attending her uncle’s funeral, I was standing in the cemetery across from Shoppingtown Mall in Syracuse before I realized my eyes were closed.  This young woman had selected just the right words and experiences to connect with me, and while I’m sure many others can relate, again, that’s not the point. 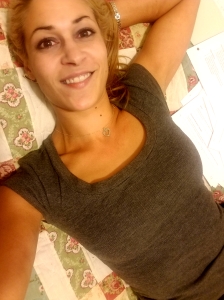 The point is that when I do what I have to do, I grow. Just as driving to work every morning has given me the time to reflect quietly about my life while the sun rises and Mother Nature provides an inspiring setting, grading narratives reminds me of the individuals filling the seats in my college-level class.  They will likely encounter the question about whether or not there is a heaven, and I want them to ask it.  This year is about bravery.  Take the right risks.   Be intentional. I stopped grading the girl’s essay and let sleep come.  That’s a compromise I wouldn’t have made six months ago.  Sleep comes easier this fall than it has in ten years.

Maybe because I’ve been able to be honest about some, starting with tonight’s deposit.  I’m not happy and untouched by the broken road that led me here.  I’m not much to speak of, actually.  Just a high school teacher trying to make a difference in a small town with an inspiring drive, waiting for life to have meaning without a family legacy.

I’m not trying to convince myself that work and Pokémon Go are enough.  They fill the empty spaces, but they don’t fill in the blanks.  I don’t have it all together, and I’m learning to express that.  As it should be, I live my current life in the shadow of what was planned, but that’s not the point.  The point is I keep waking up and doing what I know to do, hoping the answers will somehow come to me without bringing me to my knees, though even Grams would have been praying for that at this point.  Life will bring what it will bring; like the music changing my trajectory tonight, I’m open.