It’s eerily quiet on my street tonight, the melting snow dripping from nearby gutters simulates a gentle rain.  The storm that began Wednesday night continues to keep schools closed even tomorrow, our neighborhood roads untreated, unplowed, and unsafe for student transportation.  Though the snowfall ended before noon the next day, its effects reach ever forward.  The fiscal losses accrue certainly, with school and business closures alike, and countless wrecks and stranded vehicles litter the iconic winter scenery, ironic symbols of loss after the cracked pavement had just been given a fresh, blank slate in downy flakes.

This is my fourth Hampton winter, and each year we seem to get one good snowstorm, good enough to close schools for at least two days… and that’s what’s built in to the school calendar for inclement weather.  After two, I know we’ll have to make up the days somewhere.  Semester exams, state mandated test administration, current and future quarter structure, extended school days or lost vacation days… it’s all going to change.  It affects every individual in a different way from the top administrator to the contracted cleaning service employee.  That first year, I revised my kids’ calendars as soon as the snow day was announced, proud of myself for being prepared so I could enjoy the day off.

I remember spending that first Hampton snow day with a teacher friend who could handle his car in the snow.  We took on the adventure of making it to the gym where I don’t recall seeing any other parishioners as I protected my beloved workout time even in the midst of a citywide shut down.  Then, we played Nintendo games like Super Mario on my Wii.    In synchrony, our cell phones notified us with  the automated call that school would be cancelled again the next day.  I was shocked… and humbled appropriately, knowing I’d have to redo the class schedule again.

Still, I was a New Yorker; I’m pretty sure we were waiting at the bus stop unless the wind chill was somewhere below negative fifteen degrees (absent hyperbole). They were trained to handle the snow, though, pre-treating roads and accessing storehouses of snow plows primed and pre-paid for the lake-effect events that speckle the late Fall, Winter, and even early Spring landscapes in Onondaga County.  Hampton Roads doesn’t have the same basic need, and yet were there potential flooding issues, that’s our geographical specialty on the peninsula.

By now, I understand not to bother planning ahead, but to wait until we get back to school and receive new directions, then adjust the original plan accordingly; forcing my pieces to fit into an undetermined new schedule was proactive but ultimately a waste of time.  While I waited for the snow to stop falling Thursday last week, I plowed through yearbook design templates until my Pokémon Go friend TruSlyder showed up to help me dig out my car and see if we could take advantage of the last hours of the game’s holiday event and hit the real gym while we were at it.  Planet Fitness had shut down, but Niantic game servers were showering Hampton Roads with snow type creatures begging us to test the limits of my little Honda.  We helped push a lot of cars on our afternoon adventures, and we got stuck ourselves at one point, resorting to enlisting Pokémon Go friend KapnKurch to get transmission fluid to replace that lost from a line that had come loose in some intersection sludge mountains.

I managed to log dozens of hours cementing our theme in our yearbook platform by late Friday morning, enjoying the freedom to work in the expected second snow day.  This time, TruSlyder and I made it to Planet Fitness for a much needed work out, and I tried to knock as many items off my to do list as possible before driving up to DC for a weekend with my Charming.  I didn’t leave until well after dark, but the white blanket of snow illuminated the journey until somewhere north of Richmond, then it was all but gone by the time I passed King Street and prepared to begin the unpacking routine.  The truth was, I would have loved to spend a few more slow snow days back home, but I was excited for what our Saturday plan contained.

It was just one thing, really: do some wedding planning.  With the wedding expo this coming weekend in the Outer Banks, we wanted to ensure we knew exactly what vendors we needed to secure at the event to make the most of our visit.  And to do that, we had to make a lot of other decisions that led to other ideas that grew and flourished or got lost under another shared thought.  Our first breakfast spot in Old Town closed when we returned from our New Year’s Cruise two years ago.  Our next breakfast spot closed when we returned from Christmas with my parents this year.  I found a Dunkin’ Donuts, put in an On the Go order with my app, and we picked up our coffee and breakfast sandwiches at the counter, seating ourselves to be comfortable for what would become a long afternoon of wedding discussion.

We were back in that other world I’m in every other weekend where Planet Fitness and my Pokémon Go buddies aren’t on the map.  By the time Charming’s coffee was at drinking temperature, schoolwork and games were forgotten, too.  The ensuing hours would involve multi-tabbed, laptop based browsing supplemented by both our smart phones, our wedding binder, and an incredibly helpful magazine guide to weddings in the Outer Banks that subtly guided our dialogue and offered easy transitions when a particular point had become, um, contentious might be the right word. 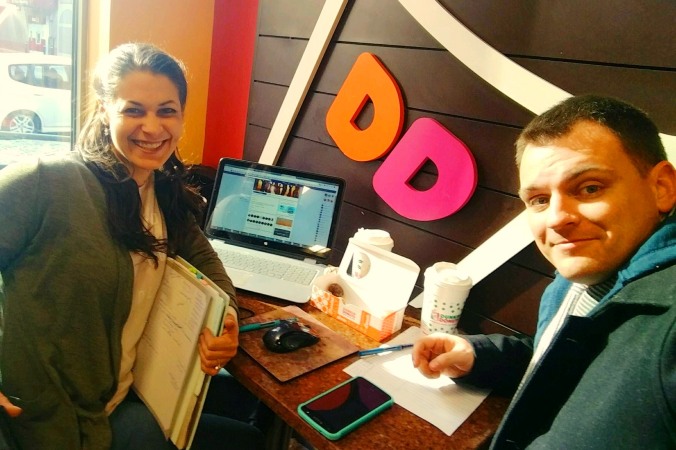 Saturday afternoon at Dunkin’ at the wrong end of King’s Street in Old Town was a bit like the aftermath of a Hampton Snowstorm.  We have both had experiences planning a wedding, being married in a ceremony, living together as a couple, and ending the vows we committed to in the planning stage.  We have certain, determined expectations for the specifics of our wedding day because of the storm that came before, from songs or scriptures to avoid to how to find a way to use my original wedding dress in a way that supports the theme of our wedding like using the fabric to create the runner that I would walk down, so when my little nephew quotes the scripture, “Forget the former things, flee from the past.  See, I am doing a new thing in you,” the past would literally be behind me.  Maybe not that, I know, but I’m thinking that way now.

Charming and I struggled a bit as navigated wedding planning, but what can you expect from two Type A classic overachievers who went to Wheaton and wield our competitiveness in stealthy ways?  The first hour or two I was just wanting it to be fun and exciting instead of like we were checking off a list on our The Knot website… which is what we were doing at first.  Then, we landed on an article I almost dismissed about how to create a hashtag for your wedding.  Considering I don’t have Twitter or Instagram or Pinterest on my phone, I don’t believe I’ve ever actually used one before.  Charming, however, was intrigued, and within moments, I was inspired.

We’d changed the title of our wedding website from “Our Wedding” to “#ANewThing” because that’s what this union is.  That’s what Charming and my lives coming together symbolizes in so many ways, and despite minor disagreements in approach or methodology, our doxology is in synchrony.  With a snowstorm, it’s the effects that yield the most damage, and Charming and I have been trained in different regions on handling all of marriage’s most difficult, likely natural disasters.  I might not have been feeling a school girl’s joy while planning the wedding to the man of my dreams at my side, but when I relayed the exchange to my mother, she suggested that what Charming and I were doing together was much deeper.

I don’t need joy.  I need Charming.  I don’t need a snow day to remind me that God makes all things new.  I get to live in that reality every day that Charming is a part of the story, and that is a blessed assurance beyond a battle of wits.  Our analytical, systematic approach to planning our wedding day may take a little of the fun out of the process, but together, we make #ANewThing, which helps us optimize every detail in which we can highlight the way that God has redeemed, restored, and renewed us as individuals, as a couple, and as an expanded family unit reaching back decades.

I planned my first wedding on my own.  It was easier, and the result was a beautiful ceremony and reception.  July 14th will be something beyond that.  Mom would always tell me glorifying God didn’t mean making Him greater than He was, but rather, showing Him to be as great as He really is, and that’s what Charming and I get to do with this expensive day, really a week, in the Outer Banks.

Every detail matters, so having two shovels working together or another body to push the car out of a sludge mountain just seems like a logical response to finding a way through to our destination.  That’s not just a day that points to all God has made new with this union – I think it will be, as Charming suggested this weekend, the theme of our lives.

That is a sweet, blessed assurance.