It’s cold tonight.  It’s fall, and I need a little freedom from the order, the structure – to escape syntax for the sheer desire to shed thoughts.  Absent system, writing doesn’t process.  It flows from brain to fingertip, uninhibited by organization that typically forces words into rhythmic patterns encased in varied sentence structure.  My student, Young Beauty, would tell me it’s time for a freewrite.

That’s what she does in her blog… though she hasn’t posted lately.  As one of my best editors, I’m glad to have her back leading the student life team after a year’s hiatus to complete the pharmacy tech program.  Certification in hand, Young Beauty kept her promise to return for her senior year despite several others who expectantly opted for free blocks instead of Yearbook to offset those AP classes.

We need her carefree spirit and innate ability to lighten the mood.  When we dreamed up her freewrite blog in Blogging Club two years ago, it suited her perfectly.  It’s been so long since I dubbed her Young Beauty it’s ceased to be a pseudonym at all, but rather how I view her.  Other teachers can relate, I’m sure, to that kid who wants you to count on her, believe in her, support her… and in turn, she gives you her respect and opens her mind and her heart to what you might have to offer.

She, in addition to several others like her, is why Charming and I chose to wait for this summer to get married.  In a tribute to Young Beauty, I’m going to give my best attempt at a “free thought” blog, where I follow my brain down a yellow brick road, and it’s up to my mind to arrive at a destination or no destination at all.

My fingers hurt from the October cold.  There’s a football game at Darling.  I hope it’s not my school.   I try to add everything to Google Calendar, but if it doesn’t make it on there, the system fails.  Google Photos reminded me of an event two years ago today, teasing me with photographs of Charming on his first weekend in Hampton, carving pumpkins and visiting Fort Monroe beach for the first time.  He proposed to me there.  We’re getting married.  I could have only dreamed it.

Young Beauty never lost hope, I don’t think, even when I was getting anxious in the waiting.  She believes, like me, that true love must be possible, because to believe the opposite is to choose to never write a love story at all.  A free thought.  Love story.  Charming.  I never thought the name would end up inspiring his proposal at Fort Monroe Beach.  I tried to get him to dress up in uniform for the Halloween party this past weekend here in Hampton, but he reminded me that it’s not a costume.  I convinced him to be the scarecrow from Wizard of Oz since I had the costumes from Homecoming.

Homecoming.  Yearbook rollout.  Unity theme.  Dr. Grove played Scarecrow in our pep rally skit at Kecoughtan last month.  Charming filled out the costume a little differently, adding the Tin Man’s ax and a facial scar offering an explanation for how he’d come to acquire it.  It was fun to dress up with him Saturday night, so much different than the first time selling yearbooks and advertising about senior deadline’s as Dorothy at the Homecoming Game.

Different is different, not better or worse, just two words juxtaposed against each other in a Dorothy costume that’s truly an identity I have to put on.  I’ve never been the Innocent.  I’m the Mentor/Teacher at school, and with Charming, I’m not sure.  I’d have to scroll through my PowerPoint of Archetypes, but I imagine the theatrical heart of me probably shuffles through a few roles each season of us.

Season. Fall.  Winter is coming.  Game of Thrones is not.  Free thoughts will undoubtedly take us to places we weren’t considering moments before.  Suddenly, I’m recalling nights cuddling with Charming in his rental in Norfolk this summer watching the recorded episodes after strolls on the beach at sunset.  The nights weren’t always that perfect, but that’s what the brain does.  We romanticize memories, inserting just the right data point to support our current thematic development, in this case emerging as a commentary on seasons, what we identify with those seasons, and the cyclical nature of time to bring us from carving pumpkins to riding off in the sunset as Dorothy and Scarecrow.

Even in free thought, the synapses are signaling, “Syntax. Structure. Make sense,” and I’m responding in kind, organizing mentioned moments at school and with Charming to support some developing theme about seasons, and yet it started with Young Beauty.  Young Beauty.  She should start blogging again.  My greatest admiration for that young lady is in her resilience.  When she writes, she grows.  I’ve seen it.  When I write, I grow.  She’s seen it, too.

I should show her the pictures from the party.  As a sophomore taking photos at prom, Young Beauty impressed Charming with her maturity such that he thought she was a senior.  The sentiment endeared him to her, and seeing him as Scarecrow with Scar and Ax would make her smile.  I smiled for the pictures Angel took, and we enjoyed an evening with friends celebrating Halloween like we do every year.  Only this is the last year. 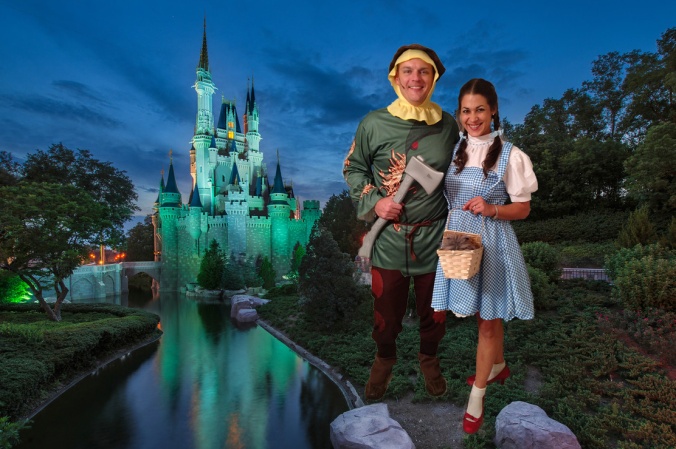 This is the last year, all the time, for so many things, like J.J.’s soccer games.  The kids have become so accustomed to Charming’s presence for family events, I’m not sure they understand he doesn’t live here.  If I let this free thought go where it wants to, it goes to J.J.’s game last week, not on Saturday morning with Charming, but the one in the rain where Katarina just wanted me to hold her under the trees to stay dry.

When I’d first arrived at the game, her twin Tessa had asked where Charming was, and I tried to explain that he lived far, far away, and that he just comes to where we live on the weekends sometimes.  They’d returned to collecting pine needles before I finished the explanation, so I was pretty confident it was too advanced for their toddler brains.  But in this stolen moment under the pine trees, just the two of us, I held Katarina tighter than usual and she seemed to imitate me.

It wasn’t long before I was crying, and she asked me why.  Her parents and I hadn’t yet discussed how to handle helping the kids understand that Auntie La La marrying Uncle Charming doesn’t just mean they get to throw rose petals… but that she won’t live here anymore.  Unfortunately, my emotions decided to make an attempt with Kat, largely inspired by the setting of one of the last soccer games of the season, at dusk, in the rain.  It turns out, she’d been listening earlier after all, so when I said that I would live with Charming after the wedding, her blue eyes welled up with tears, her chin started to quiver, and she looked up at me with an expression of disbelief that made her words break my heart.  “You mean you’re going to live far, far away?”

Dreams and seasons.  When I was Young Beauty, I dreamed of my happily ever after with Prince Charming.  In college, we sat in the same chapel pews, walked the same Quad as mere acquaintances; until we reconnected and decided to get married fifteen years later, we didn’t have the perspective for the journey that had led us to this point.  God had us on a Yellow Brick Road the whole time, through all the seasons, all the cities and the broken vows, all the moves and broken ties.

It’s the beginning of my happily ever after with Charming, only unlike Young Beauty, there are current joys in the life I built for myself before him and beyond him that make the reality of living in a land far, far away bittersweet, especially in stolen moments shielded from the rain, where I concluded that it was best for both of us, for Katarina and for me, that summer is a long, long time away too.

I’ll cherish all these moments, and believe in the Author of the Yellow Brick Road, and that I’ll look back in fifteen years and see the master handiwork of God in orchestrating all the paths, people in my life past, present, and future.  He gave me my dream.  As Dorothy and Scarecrow, we’re living in one story that’s all about the journey.  Set against the backdrop of Cinderella’s castle, we’re realizing that we’ve reached one destination we’ve both longed for… but there will be others.