I’m writing on my back steps right now, a box beside me serving as a mouse pad stand.  I can be flexible and compromise and avoid conflict, despite my inclinations.  My neighbor enjoys a good cigar on the front porch often, and tonight he picked a soundtrack with a beat that stole my focus until I packed up and moved writing night out back with the buzz of the AC unit.

We are each so different and unique.  Around me are subtle remains of my twin nieces’ third birthday party – the new cushions I bought for the occasion, a juice box carton that missed the garbage, and remnants of a pink balloon.  Two days ago, their family and friends gathered at my place like we did last year and the year before that, only this time, I specified princess costumes as a requirement.  Kat loves Sofia and Tessa loves Elena.  Mom and I dreamed up a pretty elaborate party across phone lines, then carried out all the decorative scope Saturday afternoon.

My most cherished cake as a child was the year Mom stuck a Barbie in two 8-inch rounds and frosted a pink dress over her body and the cherry-chip layers.  I decided to double the order, and I made each girl a cake with her favorite princess.  Even as toddlers, they know what they want.  When they showed up at the party in the cute dresses I’d bought them in Rome, they saw everyone else had princess dresses.  They wanted them, too.  I could count on that.  Some things are just human nature.

Mom and I had counted on that, in fact.  She showed up as the Fairy Godmother and wove a few quick fancy tales into the dialogue until the twins made their wish for princess dresses, and, Bippity boppity boom, I showed up with the girls’ Sofia and Elena dresses, perfect matches to the cakes I’d prepared.  You didn’t need to ask which girl whose dress was whose.  They grabbed correctly, and their mother and I whisked them away to the bedroom to change while guests started in on pizzas from Anna’s, my go to place for pie in Hampton.

We all have preferences.  I can’t begin to evaluate how Tessa came to choose and identify with Elena nor Kat with Sofia.  If Gabrielle shows them two dresses, the girls rarely pick the same one.  It’s inherent, our natural desire to identify with things – colors, animals, numbers, even princesses.  Yet, as predictable as is our predisposition to select favorites is the unpredictability of our developmental whims and desires.  As a girl, my favorite colors were pink and purple, but the preference evolved to a soft blue over time.  Again, I can’t tell you how or why that happened.  But I love blue.

And I can’t begin to surmise why Tessa refused to wear the crown or the jewelry or the shoes – I would have had the whole get-up on in three minutes flat with little help from my mom.  Playing dress-up was a cherished past time, and even at three, if I were to be a princess, I was ready to be the real deal.  Kat was more interested in playing with the necklace elastic than putting on her dress.  The twins had been predictable in their expressed desire for princess dresses, but their unwillingness to cooperate while changing and the refusal to don certain items caught me by surprise.

Because they are unique from me and from each other and every little girl at that party.  There were no duplicate costumes.  Snow White, Queen Elsa, Belle, and more were in attendance for this celebration of these two original creations, sculpted by God using microscopic pieces of my brother and sister-in law.   This was the first year Gabrielle opted to sing two separate Happy Birthday choruses, one to each girl, and I favored the idea.  It makes sense.  They share a day, they share blood, they share family.  But they don’t share preferences and quirks and skills and attitudes.

We navigate through preferences in daily life when it comes to how to spend a Saturday, where to eat, what color to paint the kitchen, or how to choose the next Netflix series.  Given a day off alone, there’s little tension, living in a sphere within a sphere like the sculpture in the Vatican.  But step out of that sphere into the real world and you encounter humanity; humanity has its own preference.  My neighbor preferred to spend this warm summer night listening to music outside.  I can’t blame him for his preference simply because it inconveniences me or interferes with my preference to write creatively without manmade distractions.

At three years old, the girls throw temper tampers and rage like they did at the party, and we don’t question their character or mental health.  At thirty-four, I’m expected to manage the failure of unmet expectations without throwing a fit.  Tessa would turn to this sweet man on the next porch without hesitation, emboldened by an innocent passion that’s unbridled and honest: “Stop it!  I want quiet.”  She commands, and often, the outer sphere complies.  Because she’s three.  Her personality is developing, and it’s still malleable and flexible, and the world around her adapts to optimize her growth.

I might have quickly considered and instantly dismissed asking if my neighbor wanted to borrow some headphones, but maintaining a good relationship with him is more important than the preference to write well in my favorite spot.  Why then, with people like Charming and my mom, can I not make the same wise choices to decapitate the temper dragon?  Unfortunately, I think they’ve seen me act more like a toddler who didn’t get her way than I’d like to admit.

Preferences.  This morning, I took eight tests.  They weren’t required.  It wasn’t for a degree program or certification.  It was for a full psychological panel.  I’ve always had trouble sleeping and turning my brain off, and from the way that I write, I doubt it comes as a surprise to hear my mind explained like a race track where all these cars keep going around and my job is to connect them all.  I guess I thought the tests would be harder.  Most of paper tests duplicated questions.  If the computer simulator flashing numbers tested attention, then in hell, that’s the test everyone with ADHD is taking for eternity.

I’ll get the results in two weeks.  Maybe I’ll have some great diagnosis that will help me change the medication I take to combat insomnia to something gentler.  I don’t know what to expect, exactly.  By the fourth test, I could guess the scorers could already make some conclusions about me.  I have a bad temper.  I get angry and don’t express that anger well.  I am not thinking about suicide.  I do not think everyone in the world is out to get me.  I worry a lot.  I don’t hear voices that others don’t, and I’m not more special than everyone else.

As I poured over the questions, each forcing me to select the best option given, my choices were limited.  Is this statement false, slightly true, mostly true, or very true?  There was a whole test based on my own preferences, as in which of two given options did I prefer.  My nieces couldn’t take this test, I know, but what would their results reveal?  Mine could wind up landing me with the label for some fancy mood or sleep disorder.

If we subjected toddlers to the scrutiny of mental health in our ever-present need as a society to diagnose, treat, and produce positive contributions to society, then our entire three year old population would be comprised of bipolars and schizophrenics taking anger management classes and being forced to say goodbye to their imaginary friends.    No, we let children dream and grow, and their lives are a little more like fairy tales.  There’s often magic, and their worlds adapt to their needs and wants.  If they cry or scream at the right moment, their circumstances will change by the efforts of their parents – like Gabrielle, a fairy godmother without the title, trying to satisfy her three children’s wants and needs. 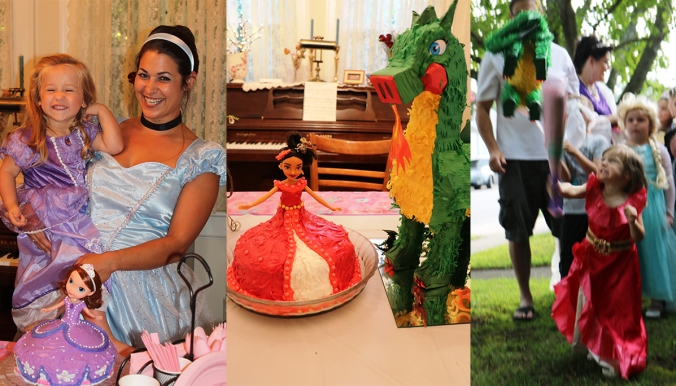 At the twins’ party, Cinderella made an appearance for the third time, but only JJ had seen her when I’d dressed up for my students at school.  Kat said, “Are you Auntie La La?”  I explained that I was Cinderella and didn’t know where La La was.  “She’s changing in her room,” Kat replied, convinced Cinderella was someone else.  I always loved putting on a costume, from when I was as small as they are now.  I gave them a fantasy world, a princess party that drew them out from the sphere within the sphere into an alternate reality where surprise visits from Cinderella and her Fairy Godmother were possible, where little princesses and knights could slay a dragon piñata, where Charming captured the joy and delight on camera.

I’m not entirely certain my results were accurate today.  After an afternoon with toddler princesses, my optimism is rekindled.  Somewhere along the way, I decided to identify with blue and butterflies and pizza and technology, and that temper that taunts a toddler was never truly tamed.  After this weekend, I believe I could slay that dragon.  My nieces remind me that anything is possible.