It’s my imagination that gets me into trouble.  It always has.  Like when I told Mom I was going to Kim’s after school, got off at her bus stop with a boy named Eric, and walked to the football game at the high school.  I was in sixth grade, already a hopeless romantic in search of magic carpet ride experiences.  And really, my parents have only books to blame.

Young adult literature satisfied neither my vocabulary prowess nor my literary pride.  I read those on my older brothers’ assigned reading lists, before I would register the associated undertones or encounter any of their universal themes in my own life.  Before my pre-teen taste buds had fully developed, I’d tasted the rich delicacies of American literature.  My appreciation was premature, immature.  My still-forming psyche was negotiating with J. D. Salinger’s Holden Caulfield in the afternoon and attending my first school dance with Eric that night, seven months after the football fiasco that got me grounded until that romantic outing.

I’d begged and pleaded to go.   My brother P.J. would chaperone, of course.  How could I miss my first school dance?  This was a twelve-year old’s rite of passage.  I’d written in my diary about what I imagined the night would be like.  I had picked out the perfect dress.  Davey had asked me, but I held out for Eric who caved a few days before the dance.  I had the perfect date.  He was on the lacrosse team with P.J., splitting our ages in the seventh grade.  An older guy.  We would laugh and glide in the Electric Slide, then a slow song would come on, and he’d take my hand.

Perhaps my vision of a school dance was first influence not by literature, but by movies my mother and I would watch together on snow days.  Anne of Green Gables.  We’d watch the whole VHS series, cuddled up together with snacks, cozy  blankets, and each other.  I imagined a first dance to be like Anne Shirley’s, wearing a beautiful dress and choosing suitors from a dance card, selectively employing a bit of coy flirting that might culminate in a stolen kiss, brief yet full of sentiment.

Have I mentioned I was twelve?  Or that Eric was on the lacrosse team?  The night itself was perfect, warm with the sun just setting when my parents dropped us off and we met Eric at the entrance.  P.J. was laughing, I’m sure, but this was not what I had planned.  It turns out, the younger players on the team were forced get mohawks.  Eric’s red hair was now shaven above the ears and spiked up in the middle like the plume of a knight’s helmet, yet nothing in its complement to khaki’s or a nice shirt resembled shining armor.

I could feel my first dance unraveling at that moment, before the night began.   I had dreamed of this night, had encountered Scarlett O’Hara’s passion and intimacy in other snowed-in movie days with my mom, had even pouted my way through a cold Halloween the previous year with Scarlett’s banana curls and a hoop skirt gown.  I’d read about romance.  I’d seen it in movies.  I’d scripted my own night perfectly.  This haircut wasn’t in the script.

It didn’t fit my imagination’s pre-conceived moment, but I wasn’t ready to abandon the magic carpet just yet.  Y.M.C.A loosened things up a bit.  We lost my brother in the Electric Slide, and I was certain the night would be redeemed by something worthy of the teenage romance section in the library at the very least.  The music slowed.   Eric pulled me close, putting one hand around my waist and lifting my right arm up with the other, seemingly in one motion tucking my head between his head and his chest.

I hadn’t imagined his heart beat.  I wasn’t prepared for the scent of adolescent sweat beneath perfume that wafted from the couple to our left.  I pulled back a few inches, and I could see Eric was singing the well-known words.  I laughed, joining him, hoping for a little comic relief.  “I swear by the moon and the stars in the sky…” In my imagination, this had been perfect.  My imagination didn’t account for unknown variables.  No one was sweating at Anne Shirley’s first dance.

Then he kissed me.  It was what I had wanted, right?  My first kiss at my first dance on my first official date with a guy I’d been crushing on all year.  His kiss wasn’t brief or respectable.  Scarlett O’Hara probably would have slapped him.  But my braces and glasses didn’t lend me the same confidence as my Halloween costume had.  I simply hugged him goodnight near the car, appropriate behavior in front of my family.

And I think that’s what disappointed me most about that evening.  It wasn’t just that things hadn’t turned out as I had planned.  It ended up being a night that I couldn’t go home and tell Mom about.  She wouldn’t like the idea of me French-kissing a boy at age twelve.  The truth was, I didn’t like it either.  Perhaps there’s another first to add to that night… when I began keeping things from her that would hurt or disappoint or make her ashamed of me.  I was too young to see the story I was writing, and I certainly hadn’t imagined the gorge between us that would grow seemingly impassible at times.

My imagination gets me into trouble most when what I had imagined beforehand turns out to be far greater and richer and lustrous with what reality offers in return.  With the calendar date ever closer to my next birthday, I consider how different my life looks from what I had imagined.  And if I had put that amount of foresight into my first date, one can begin to surmise the wealth of imagination stored up in dreams started in childhood, carried up through adolescence, and glimpsed and in adulthood.

Snow days always remind me of family, so I was glad Charming was able to make it into Hampton this weekend before a winter storm dumped a foot of snow and kept us mostly homebound.  He had liked my blog last week and was glad to see me acknowledging happiness in my current circumstances.  We spent the weekend trying to beat the old-school Super Mario Bros 3 but were stuck in the boss world when he needed to get back on the road.   We had fun playing.  I cooked.  He shoveled.  We adventured out into the icy side roads because Charming knew I wanted to go hunting for Pokémon, if only to get a picture of one of these virtual creatures spawning in our snow storm. 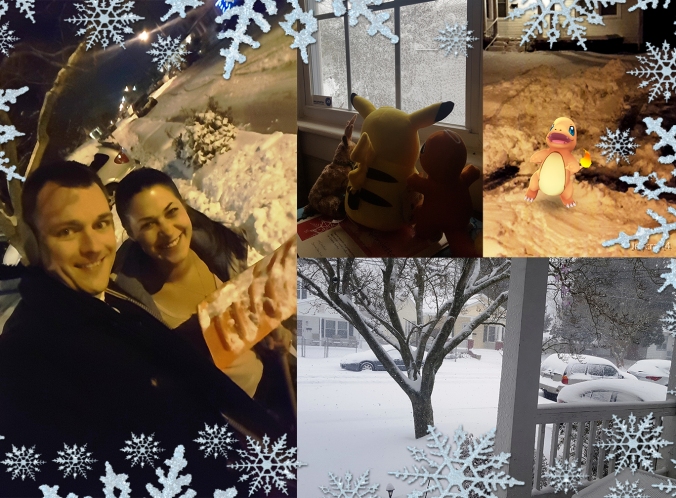 Yes, part of me wished there were children to help make a snowman in the front yard like P.J.’s kids were probably doing, but that’s only because my imagination is so strong.  After Charming left, I called my mom.  She wanted to hear all about it.  And that’s what I think is so strikingly different about the era of Charming than any other in my life before it.  I get to speak freely with my mother.  I don’t make choices that I wouldn’t feel comfortable discussing with her.  I’ve glimpsed God’s grace in her own deference toward me, and I richly enjoy now the comforts of an open dialogue.

With the weekend over and my real snow days just beginning, I knew I should be excited to be off from school.  Still, for me, I know that alone time is when I begin thinking about my young imagination’s efforts toward the future I should have but don’t.  I wished my mother was here to watch Anne of Green Gables with me, but I settled for the phone call, then found a show to binge watch in the coming day.  Netflix suggested Reign based on viewing preferences.  It wasn’t until the end of the first episode, when the Queen of France threw her head back and laughed, that I recognized her.

It was little Anne Shirley from my childhood snow days with mom, now a generation older and playing a much different role.  That is the power of imagination.  The character that played Anne never could have dreamed up her future casting in a series playing the mother-in-law of Mary Queen of Scots, progressing from an innocent ballroom with a half-filled dance card to one likely brimming with poisoned wine by her own hand.

We can imagine our lives, we can dream, and we can plan.  We can account for variables.  But I’ve found that the richest of my own real life moments didn’t unfold at all like a fiction piece I’d penned that fulfilled all my wildest imaginings about romance and the major themes of American Literature prematurely glimpsed before their weight could be grasped.

I don’t write fiction on Tuesday nights.  I write about what’s really happened in my life at almost thirty-four years old.  It’s not a fairy tale or romance novel or a story of redemption.  At times, it is a little of one or the other or all three.  I’ll take the unscripted joy of Charming, Super Mario Bros 3, Pokemon Go in a winter snow storm to an imagined story of building snowmen in a corresponding role to life in my thirties that probably wouldn’t have turned out like I planned any way.

So I’m glad, really, that I’m not writing the story of my life.  Charming wouldn’t have fit in that plan to marry fresh out of college and have a couple of rug rats by now.  He’s a reality I couldn’t have known to anticipate, a whole new role, a second chance, like little Anne Shirley now Queen of France on Netflix.

I still dream of snow days with my mom and snow days with my future children, but I’ve got sweet stories about a life that I’m proud of when I call Mom on the phone these days.  And we’ve got Charming to thank for my willingness to reinvent the imagination.