Five states and three Christmases with family celebrations and visits with old friends scattered in between.  Somehow the silence in my parents’ garage is unnatural after the frantic festivities of the past five days, the patio heater Mom gave me this weekend finding its ideal purpose as I hide from the cold rain.  Charming is with my father and brothers at The Dome watching the ‘Cuse.  My sister-in-laws have finally coaxed the four little ones to sleep.  I’m alone for the first time in nearly a week.

And I’m grateful for the unnatural silence, however unsettling.  We’ve managed to pack in a full season of memories into a long weekend.  We kicked off the holiday with an early Christmas in Maryland with Charming’s family, and I felt quite at home there having shared so many holidays with them in the past year and half.  As we drove north on Christmas Eve toward my family, I found myself giving Charming a Cliff Notes cram session, preparing him for all the people that he would meet in my world.

I told him about Grams, about what to expect now that dementia and a stroke have nearly silenced her.  Then I told him who she was to me growing up.  On Christmas day when Dad took us to the nursing home, he’d see an old woman, tender and sweet, uttering only a few words.  He’d watch me talk her through the photographs on her wall, reminding her of all the doctors and teachers that came from her, all the great-grandchildren that wouldn’t exist without Grams as the Matriarch.

And I did so with tears in my eyes as I understand Charming will never get to know the woman who so dominated my youth with her strong will, resilience, and vibrant spirit.  The qualities I most revere in my grandmother are ones she passed on to me. I told him about that woman on our road trip north.

I also told him about Michelle, the woman who’s cut my hair for thirty years now.  She’s more than just my hair dresser.  In my time working at the Hair Shed as a receptionist in high school and college, Michelle became a dear friend and confidant.  I took him with me this morning when I had four inches hacked off because stories just wouldn’t cut it.  Michelle’s witty banter with our boss Johnny is best observed in person.  And she told him stories about young Laura Joy… and all her loser boyfriends.  It’s amusing now that I’ve got Charming in my life.

And I told him about Joanie and Bob, my parents’ best friends, though I’ve done so before.   These people are uniquely different from Grams and Michelle because I got to know them when I moved back to Syracuse for a year after I left my husband.  They didn’t know me when I was a fearless teen, grabbing life by the horns, determined I would change the world, holding myself to an expectation of perfection.  Those qualities were endearing, however misguided my young heart was at the time.

No, they met me when I was dead inside.  When I could barely gather the will to climb out of my old canopy bed and face the mess that I’d made of my adult life.  For the first couple of months that I was living with my parents again, the only outings I made were to their small group, church and Sunday lunches with Joanie and Bob afterward.  There was nothing beautiful about me to attract them.  I was hopeless, faithless, lifeless… fallen.

Fallen.  On Christmas, my family and Charming all curled up together in the family room to watch a Hallmark movie about a young writer.  She was a hopeless romantic and endearingly dramatic.  The protagonist, after falling for an irreverent young man, writes in a letter to her mother that she is now a “fallen woman”.  We all laughed at her histrionics, and in a way, I was laughing at myself.  She reminded me of a younger me, always seeing the world in superlatives with consequences far more dire than reality would assess.

I was, in fact, a fallen woman when Joanie and Bob set their hearts on loving me, their friends’ broken daughter.  Perhaps I, too, had fallen for the wrong man, and I left in attempt to right my own ship, but I was a fallen woman because I lost faith.  I could not see God’s hand in my divorce or my childhood bedroom.  I couldn’t see Him in the severance of a decade of the life I was building in Nashville, snuffed out with no farewells.

Despite my unbelief, they welcomed me as the odd member of their small group more than forty years their junior.  It didn’t take long to understand why my parents cherished this couple.  Bob met Joanie on a blind date and proposed the same night.  When she said she needed to think about it, he said he’d check in the next day, and when he did, she agreed to become his wife.  Fifty-four years later, they’ve written quite the love story.  That same tenacity with which they approached their union regulates their ardent dedication to my parents.  I’ve never seen my parents laugh so genuinely as when Joanie and Bob are in their company.

They are real and authentic, guided by a fervent faith in a God of grace.  And they believed in God’s grace for me even when I’d stopped trying to utter faithless prayers.  Joanie inserted herself into my life as my mentor without my permission.  That’s Joanie.  She speaks her mind, and fortunately for me, she’s been imbued with the wisdom necessary for her words to carry weight.   My inbox is littered with unprompted emails over the past three years, careful words of encouragement at just the moments when I needed them.

Moving to Virginia and away from their small group didn’t end Joanie’s investment in me.  She’ll drop me a note after a blog post I wrote prompts a thought or when God lays me on her heart.  In essence, there are a handful of emails in which Joanie told me what I needed to hear, and what I might not have actually “heard” had it come from anyone else.  When I moved home during my divorce, I could have never anticipated the extension of family I would gain in her and her husband.

Preparing Charming for meeting these two incredible people stirred memories of that broken season, reminding me of the fallen woman I was when I parked my car in this garage nearly four years ago, head hanging in shame.  I wanted him to understand the role they’ve played in my life, loving me simply because their best friends’ daughter was lost and in need.  Now, when I call Mom after weekends with Charming, she insists I give her all the details because Joanie is waiting for an update.

Last night, Charming got to do more than put a face with a name.  He could feel their warmth and love in a simple greeting.  I awoke this morning to another carefully crafted email from Joanie that brought tears to my eyes. She told me it was great to finally meet Charming, a man who was “handsome, delightful, modest, and perfect” for me… a far cry from the boys I introduced to Michelle back in my Hair Shed days.  Joanie promised to continue to pray for us both as God continues to knit us together, and in doing so, she speaks His grace into my life. 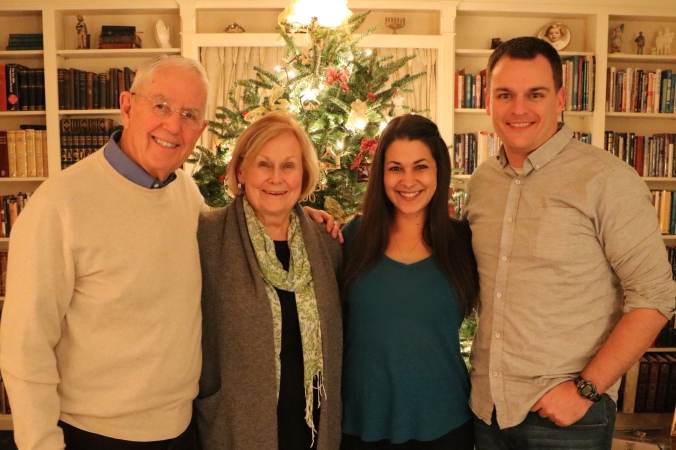 Bringing Charming home for Christmas was about more than presents and delicious home-cooked meals.  I was taking him to a place that contained all of these people who have shaped my existence at varied junctures, people like my grams and Michelle who knew me when I was young and hopeful, and people like Joanie and Bob who knew me when I was at a loss and emptied of life.

Bringing Charming home for Christmas is painting a picture for him and for me of God’s incredible redemptive grace.  Nearly four years since leaving Nashville, I am whole again.  Restored.  Surrounded with family and friends, in love with a man who is more than worthy.  Somehow, when Joanie looked into my downcast eyes back then, I think she saw who I would become.  She committed to speaking hope and encouragement into my life, absent any obligation to do so, so that woman might be revealed.

Joanie saw God’s hand on my life when I couldn’t.  God knit us together, too, an unlikely pair separated by miles and decades.  And we’ve both bid farewell to that fallen, broken woman who came back from Nashville.