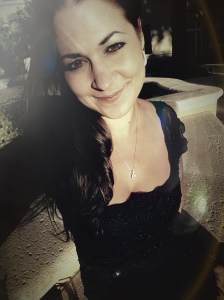 I was sitting in the third row on the groom’s side between two brothers and their wives, alongside my mother and father, in front of a gazebo at the Ritz Carlton.  My youngest cousin repeated after the minister, “I promise… forsaking all others… in sickness and in health… ’til death do us part.”  I flushed, but it wasn’t the Florida sun.  I made those vows, too, nine years ago.  A Disillusionment of Marriage petition parted us four and a half years later.

The undying devotion between the bride and groom was palpable.  My older cousins were visibly moved as they stood up for their little brother while he made vows to his fiancé that would make him her husband.  He’s the first of the four boys, now men, to marry, and my aunt and uncle were glowing with the joy and delight of uniting their son with this young woman they’ve come to love, now welcoming her as their first daughter.

Auntie Cherry made the veil.  She’s more than a seamstress.  Her creations are delicate and elaborate, embroidered with precision, intricately crafted into christening gowns fit for St. Peter’s gates.  This veil was no exception.  I imagined what it must be like to make a veil for your youngest son’s future wife.  How many hours did Auntie Cherry invest in this symbolic gift of epic proportions?  I can picture her over her embroidery machine where I’ve watched her so many visits in the past, only now I imagine she was sewing prayer and hope and God’s promises for her son and her daughter-in-law into every stitch.

That moment when the veil is lifted, the true beauty of a bride is revealed, and attendants can’t help but smile.  In my row alone, there were my parents married forty-four years with four children, David and his wife at sixteen with two children, and Tim and his wife at four with a baby of their own.  When they see the veil lifted, I imagine these couples recall their own wedding days with renewed passion in the nostalgia of the moment.  When they hear the vows, they reflect on their own times of self-sacrifice, illness, and hardship, celebrating silently in a simple arm around the shoulder or squeeze of the palm as if to say they’re still living out their promises.  And they should celebrate.

Also in my row was my great aunt Gladys.  When my grandma’s little brother passed shortly after Tim was married, Aunt Gladys’ world literally imploded.  They had just made the move to their winter home in Florida a permanent one, and she was far from her lifelong friends back in Niagara Falls.  She travels to South Carolina and does Christmas with my oldest brother’s family now.  I hadn’t seen her in a few years, but she looked younger than I remembered.   The retirement community and warm weather have been good for her.

It wasn’t until the married couples’ elimination dance that I realized what Aunt Gladys must have been feeling during the ceremony, watching two youngsters begin their lives together while she lives alone with the pain of Uncle Endor’s absence.  At the reception, she admitted that she prays the Lord will take her home to be with him again.  When Aunt Gladys saw the veil lifted, she most certainly recalled her simple union before a Justice of the Peace, and when my cousin made his vows, she most certainly was feeling the pain that comes when death does, in fact, part you.

The Ritz Carlton resort is a stunning getaway with manicured pathways, expansive pools, and rich art and architecture.  For my brothers and their wives, the weekend was a romantic getaway.   For Aunt Gladys, it was a weekend away with her best friend from the retirement community as a travelling companion.  For my cousin, it was the beginning of the rest of his life.  We came together from the far ends of the country to celebrate the vows that would make two become one.  Widowed, married, divorced, and single, we would love watching love birth a marriage together, even in spite of our own mixed emotions.

For me, I was only too aware of my status as the third, fifth, or seventh wheel.  I resented the convention that kept Charming occupied in DC and unable to escort me.  I concede it should have been a very romantic place, but that’s best achieved when you’ve someone to romance you.

This was the first wedding I’ve attended alone since I met Charming.  Perhaps his presence at my side appeased the twisted guilt and shame, masking its full measure.  We’ve celebrated as three of our friends marked the beginning of forever, and we’ve danced the night away each time, enjoying being divorced together, feeling less “single” even though technically we’re still competitors for the bouquet and garter tosses.

When I saw the veil lifted, my mind drifted somewhere unique, I think.  While others recalled their own vows and dreamed of someday getting to say those vows themselves, I pictured the cherished ring bearer pillow Auntie Cherry made for my wedding day, with ivory fabric that matched my gown.  Edged in lace, ribbon to tie the rings, encumbered in embroidered butterflies and flowers on one side and a cross on the reverse framed by my name, my husband’s name, and the date of our ceremony.

It’s still one of my prized possessions.  When I told her it was too beautiful to be a ring bearer’s pillow, Auntie Cherry replied that it was special because it was for me.  It was a labor of love.  Though it pains me to turn it over and read the names embroidered together, the same names that would eventually appear on the final page of a divorce decree, she invested her time, prayers, and love into each stitch of that pillow.  I leave it facing butterfly-side up.

We inherently recognize facets of a marriage ceremony as symbolic and suspend reality to allow them the significance desired.  The ring, an unending circle.  The wrapping of the stole, a three-cord strand with the couple and God.  The kiss, a seal of promises made.  The cross, the union of Christ with His bride.

It wasn’t by accident that Auntie Cherry sewed butterflies into that ring bearer pillow.  They are my symbol for hope, promises, and new beginnings.  The night before I left for the wedding, my friend Mulan and I Skyped for our Bible Study on Fervent.  One of the chapters we discussed was on the role of prayer in combating the past.  Pricilla Shirer concludes each focus area with related verses, and she reminded me of a promise God made to me in my college days, weeks before I met Charming for the first time, nearly a decade and half before I’d meet him again.

Isaiah 43:18-19 reads, “Forget the former things; do not dwell on the past.  See, I am doing a new thing!  Now it springs up; do you not perceive it?  I am making a way in the wilderness and streams in the wasteland.”  Auntie Cherry embedded this verse into that ring bearer pillow in the embroidered wings of the butterflies.  God can still make something beautiful and enduring spring up in the wasteland of life post-divorce.

Even while I write this post on my front porch haven, Facebook is notifying me of my brother’s new Facebook cover photo featuring our family at the lake house this summer.  I’m in the middle surrounded by all the couples and their children.  Either I’m the fifteenth wheel, or I’m engulfed in marriages that uphold vows, that model for me how to have a God-fearing marriage and raise children with character.

During the ceremony this weekend, when the minister asserted that marriage was the best revelation of the relationship between Christ and his bride, the church, that the best way to experience the fullness of our union in Christ is in the symbol of our marriage, I agreed.  I grieved, and I agreed.

God is doing a new thing, for me, for Aunt Gladys, for Charming.  We see the wilderness and can’t imagine life springing forth, like glimpsing just the first few stitches and being unable to picture the butterflies taking shape beneath Auntie Cherry’s sewing needle.

When we vow ’til death do us part, we don’t want death, but it’s preferred on that day to anything else that might part us.  Auntie Cherry didn’t labor in vain on that pillow.  The symbolic reminder of my past on the reverse is covered by a hopeful token for my future.  I’m still believing for streams in the wasteland… for me, for Aunt Gladys, and for Charming.