A sprinter in my schooldays, I know how to prepare for my races. The Rugged Maniac in Petersburg this weekend, however, was not my race, though leaping over fiery mounds felt oddly reminiscent of the 110 m hurdles. My best event was a quarter of the way around the track. This mud run was the equivalent of more than twelve revolutions with twenty-five obstacles looming at every bend in the muddy terrain.

My friend Ariel had urged me to commit to the run back in January. We registered together, but we drove separately. She and her racing crew arrived after me and were placed in a later wave, so I braved the starting line alone. The nervous butterflies reminded me of waiting in the wings on opening night of Into the Woods my senior year of high school, waiting with my father before walking down the aisle, and waiting for my turn to address the class at my graduate commencement.

My parents were there for all three of these major moments, and though they couldn’t attend my mud run, I wasn’t on my own at the starting line. Charming stood only a few feet away ready with the camera to capture my voluntary sentencing. While mapping out some of the obstacles beforehand, he’d had the opportunity to give me some pertinent advice. About five minutes into the race, Charming was lost from view, but my mind would replay his voice at the most opportune moments.

The first twenty minutes were fun and exciting. There was a Wounded Warrior crew competing in my wave, in uniform and inspiring. The initial obstacles were minor challenges, sufficient only to unwittingly build my confidence. My gym mentor Chuck had been training with me for weeks, coaxing me to hit the weights using a most effective strategy: he’d started with exercises for muscles that would very quickly produce definition. It worked. I was seeing progress, so I committed.

When I breezed through the beginning of the course, I was certain I would finish without incident. I hadn’t seen any mile markers when I came to it, the event that eternally klutzy individuals fear: crawling through water under low-hanging barbed wire. Charming was nowhere in sight for this one, but I heard him loud and clear. “Keep your head down. Keep your eyes down. Your shoulders and back will follow. You don’t have to see the end. You’ll come to it eventually,” my mental paraphrase quoted him.

And that was oddly reminiscent of my first time golfing with my father where he said, “Keep your head down,” more times than probably pleased his patience.  But our families have a unique vantage point from anyone else on the planet. While their presence in our defining moments is an unequivocal show of support, their advice, solicited or not, is an act of compassion.

I came out from the barbed wire unscathed, Charming’s strategy having brought me safely to the other side. He had given me advice because he cared about my well-being. I only knew that I needed his pre-race practical insights when I was face down in the obstacle. It wasn’t until then that I was grateful for it. Often is the case for counsel.

My parents have been a flowing fountain of support and compassion since my conception.   There have been times when I dismissed the relevancy of their advice, one resulting in a divorce where neither said, “I told you so.” I suppose I’ve lived long enough now to see that they’re usually right, and so it’s rare that I disagree with their suggested courses of action… and when I do, I’ve arrived there by creating a formula from all of their past pearls of wisdom.

Perhaps I’m selfish in hoping they’ll choose to retire near me. After all, I am only one in an increasingly large family. But it would be selfish not to give my fictitious future family the benefit of their routine presence. Their support and compassion. No babysitter could, ninety-nine percent of the time, handle a situation in exactly the same manner, right down to the choice of applicable idiomatic expressions that irk my father. My mother could.

When I ran my first 400 m hurdles as a high school junior, I wiped out on the wet track. I don’t remember if I finished the race. I know I ripped the knee of my leggings. And I know my dad was there to put me back together. To be honest, though I know I often disregarded his advice in my teens and twenties, I can’t put my finger on more than one or two specific memories.

But for the times he was right, I could fill a devotional. Like not taking a year off from college when I moved to Nashville. Or how to choose the right car to avoid buying more than I could afford. Or if I kept my head down, my driver would actually connect with the golf ball.

For me, I think I’ve come to invariably forgive any unwelcomed advice from my parents because I’ve lived long enough to see that I’ll never know when I might need some small piece of it. I tuck their words away, and when I need them, I replay them like I did so naturally with Charming’s voice beneath that barbed wire. To advise me about my life, my parents had to be present in it. Their presence was support. I ran faster when Dad was by the finish line. I sang clearer when my mother was in the audience.

And apparently, I endured the Rugged Maniac better when Charming was in view. By then, I was feeling the burn and finishing the course wasn’t as certain. I’d gashed my shin in a surprise mud pit, but there was no pain, just blood and adrenaline. Seeing Charming, camera ready at the next obstacle, I found myself smiling in spite of myself. Family, and those we welcome as family, support us with their presence. When he watched me navigate the next barbed wire feat, in between keeping my head down, I was still smiling. 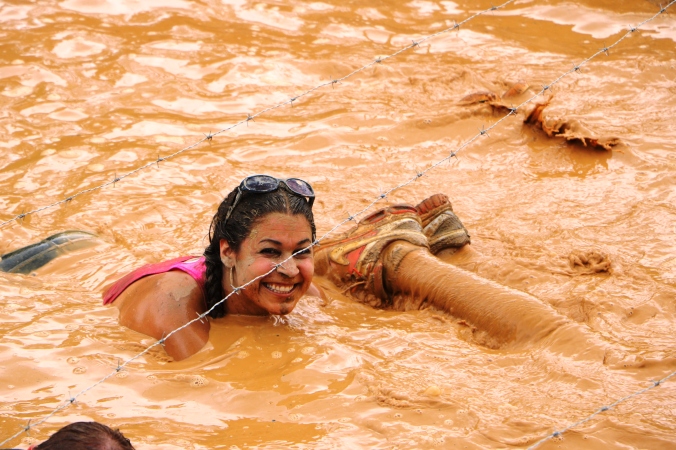 Progress happens when we’re not looking. It’s the mile markers that tell us we’ve made any at all. When I felt like I was in over my head swimming through an underground tunnel filled with roots that my colorful imagination had transformed into snakes, I tried the same bit of advice. I kept my head and my eyes down. Eventually, the end came. My heart was racing, but I’d completed two-thirds of the race by then.

While I was waiting for the final obstacle, The Warped Wall, I could just see Charming in the front of the crowd beyond other competitors’ attempts to scale it and was determined to make it on my first try. I thought about Ariel, my gym mentor, and Charming’s support in getting me this far. The final mile marker would redeem the progress.

I took off like a sprinter popping out of the blocks and past and present blurred. It could have been my father or Charming at the finish line in that instant. The feeling was the same. I’ve lived long enough to see the simplest acts of a compassionate man are his presence and his counsel.

And I made it up the wall on my first try.