“Fairy tales aren’t just for children,” one of my young men declared as his take-away from our Fun Fairy Fiction unit in tenth grade English class. On presentation day last week, eager teens entered through a castle door into a medieval celebration. Coats of arms framed a banner waving, dragons hung from ceiling tiles, and a knight stood watch as my students were greeted by their guest host, Cinderella.

While teams of kids were plotting their fairy tales, I was plotting a surprise visit. Armed with a British accent to cement the illusion, Cinderella explained that Ms. Palma was pulled away by an emergency and crossed realms to ask Cinderella to guest host the presentations. With the help of my fairy godmother’s magic wand, I had crossed through a portal from Kingdom Far Far Away to Kingdom America.

One might think a sixteen year old would need more convincing to suspend reality and believe that the blue gowned woman before him is not simply his teacher in costume. But regardless of our ages, we suspend and believe regularly – every time we load up a Netflix series or laugh through a musical comedy. We know that that the characters are actors. We know the story is fiction. Yet we engage, suspend and believe, and are thereby transported into the pleasing entertainment arena of imagination.

Cinderella had brought with her refreshments of golden corn pouring out of pewter pitchers and bowls as well as silver kingdom kisses as a reward to each presenter. In character for ninety-minute blocks at a time, you wouldn’t hear me call them popcorn or Hershey’s. The clothes, the accent, the facial expressions – that alone wouldn’t turn an ordinary presentation day into a meaningful learning experience.

It was all the unanticipated, unplanned ad libbing that sold the illusion. One of my students asked to take a picture with Cinderella, and I obliged though I didn’t understand what type of magic was inside the tiny contraption, worried that I would be trapped inside its tiny glass face. The kids explained what a cell phone was, in a way that would make sense to a foreign, medieval princess. Even with reality suspended, they were applying real life problem solving skills to teach Cinderella. 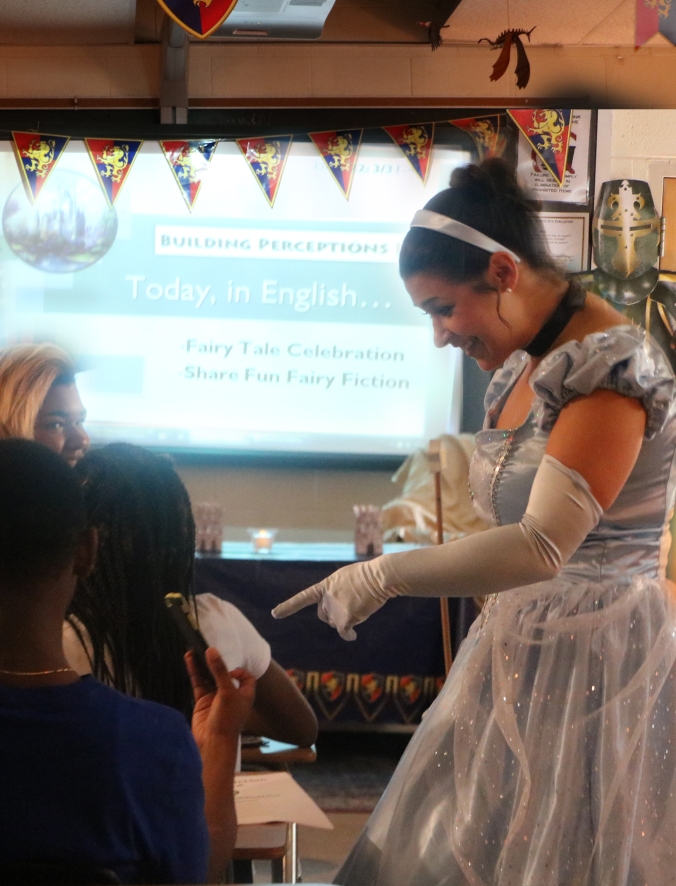 When the loudspeaker interrupted, I stopped in bewilderment, slipped through the desks as gracefully as possible in my hoop skirt, and pressed my ear to the wall beneath the speaker, wondering how to rescue the person stuck inside. They explained what a loudspeaker was, made comparisons between its audio capabilities and the visual capabilities of the cell phone they had already taught me.

Cinderella had only to ask them how they knew who she was and the students essentially demonstrated mastery at every unit concept in the moments that followed. “What do you mean, I’m a character?” and, “I’m in a story?” and “What’s a fairy tale?” and “How’s it different from other stories?” and “What’s a moral?” My sophomores became the teachers, owning their learning in a way that delighted me almost as much as my glittery gown!

One of my male students claimed he was a knight and would like to ask for Cinderella’s hand. Not missing a beat, I replied that I was already married to Prince Charming and he’d agreed to let me cross realms only if I brought along his most loyal knight. They told me about happy endings, and I concluded that I had one. We chatted about my friends Snow White, Beauty, and Rapunzel. There, amidst hearty laughter and lighthearted ad libbing banter, I truly was a guest host as my students rose to the proverbial podium.

As they shared the tales they had written, I responded as Cinderella would, continuing to reinforce that it was for these stories that she had come from Far Far Away, that she shan’t want to leave after such a marvelous, magical visit, that Ms. Palma would be so proud of their work.

I really was. Each tale was incredibly unique. Having started their project with fully formed characters and settings that needed to fit into a fairy tale together, the teams had demonstrated creativity and critical thinking to resolve plot decisions together. While they were planning, I would hover every so often on the fringe of the teams, overhearing their discussions. We studied fairy tales, but to write them, we had a strategic undertaking. It was about the elements of story and fairy tales, yes, but more importantly, it was about teamwork and imagination.

The final products were pleasing in their own ways, and every plot led to someone’s happily ever after and a moral that we could relate to. In self and peer reflections, students were able to evaluate themselves and their teammates and assess the unit. Their responses support the conclusion that working with others was not without its challenges, but that they ultimately couldn’t have arrived at their published work without at least one contribution from each member.

This weekend, Ms. Palma’s Charming joined her on this white wicker loveseat and looked through the pictures from Cinderella’s visit to my class. As much as I tried to explain why a certain photograph made me laugh, I knew I could never do it justice. What transpired in my classroom was a fairy tale of its own, and my students and I were the characters. For an afternoon, we weren’t in a school. We were in a story. It was like trying to summarize a movie and falling short. You had to be there.

This story had a very happy ending, as students exited the castle into their spring break adventures. I took off the costume, put away the decorations, and stared at the empty classroom. Moments before, it had been buzzing with collective imagination. Now, the bare ceiling tiles simply convinced me I would have to plan another unforgettable unit.

Fairy tales aren’t just for children. They were, after all, originally created for grownups. Perhaps it is easier for me to dream like a teen since I never left high school, but we all love a happy ending. We get angry at our favorite TV series for killing off a beloved character. We cry at The Notebook. We mark the success of a production not by how it develops, but by how it resolves in the end.

For me, this unit with fairy tales reminds me of the importance of every part of the plot. In each stage, from conception to publication, my students were engaged in a transformative journey. They faced and overcame conflicts. They wrote their own success stories even as they penned the pages of their team fairy tales.

When the story is over and reality resumes, the happy endings inspire pursuit of more happy endings. Spending time in a realm where anything is possible, where Cinderella commutes to hear your story, bolsters your belief in hopes and dreams.

When I shed the blue gown and became Ms. Palma again, the magic had faded, but the inspired theatrics had changed me. I didn’t need a costume to imagine all of my own possible happily ever afters.