My magnolia trees will bloom soon. In fact, a few impatient buds are already crawling out of their casing, begging for light. It will be my second spring in this rented bungalow. Now, I know to expect magnolias. That they’ll be cotton candy pink. That they’ll bloom for only a few weeks. That they’ll shade the front garden beds all summer long. And that changes things. 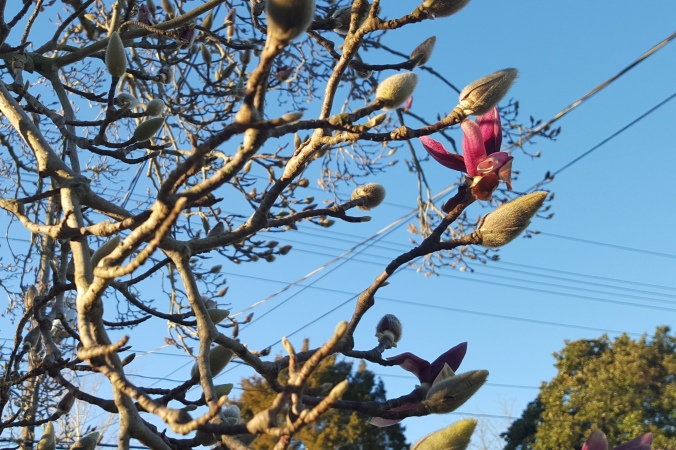 A year ago at this time, I hadn’t planned to craft a garden. The magnolias were responsible for planting that seed. They bloomed and they were beautiful. Then, the inconspicuous bushes dormant since I had moved in suddenly boasted azalea buds in varying shades of pink. Mother Nature was inspiring. It was here on my white wicker loveseat, overlooking the desolate, empty garden beds beneath a blanket of Magnolia blossoms that the seed took root.

I was inspired, and I wrote about it. As soon as the last threats of frost were gone, I bought a few tools and some seedlings and played in the dirt. It was a Saturday in April. I figured it would just take a few hours. I didn’t realize that the beds were overrun with vines and clover weeds, and I hadn’t anticipated the host of hours that ripping them out would take.

I know now to expect the magnolias, and that they will once again force my hand to the shovel, even though I also know now to anticipate the back-breaking, knee-aching labor involved in creating a garden. That changes things, too. This year, I’ll plan a day to work the soil, and another day to plant flowers.

After toiling well past twilight, the garden was finished… or so I thought.

Within weeks, the magnolias would shade the yard and starve the petunias and the salvia of the direct sun they needed to thrive. The hanging baskets would shrivel with insufficient light. I would have to start again.

It didn’t faze me, early on. I found that the ebb and flow of the life tide in my garden mirrored my life in uncanny, inspiring ways. My writing found a focus, centered on growth… mine and my garden’s. Each week as I sat here to write, words simply formed themselves into extended metaphors while I looked out at the garden.

For seven months, I tended that garden. I continued to experiment with various species; some thrived and some died. I began to expect that, too. I was living out Gardening 101 with a Google Search textbook and a Home Depot tutor. I reinvented the garden every couple of weeks, and it pained me to cut back the evening glories when I strung up my Christmas lights.

My expectations for my garden are optimistic. Having completed my introductory course last summer, I will undoubtedly make better choices in what to plant, aware of the shade limitations. Nevertheless, I know not to get too attached – a few rainy days in a row and a drown plant frowns. I’m going to experience some loss, but somehow that’s just as inspiring as the growth.

In my garden, anyway. My expectations for my life are not quite so sunny. My juniors were discussing the American Dream today as a part of a unit I taught for the first time last year. These students’ perceptions of the American Dream echoed last year’s. Some want riches, others fame, and still others family. My conclusion echoed last year’s as well. Our dreams differ. How we determine and evaluate success differs.

We agreed, however, that the common denominator is hard work. Our dreams won’t be handed to us. We don’t deserve the glittering things. We need to enter in guts and gumption in our half of the equation. And even then, it’s not promised. It’s not guaranteed.

I certainly didn’t anticipate that I would have a failed marriage and be starting over in my thirties, single and childless. Now I know, and it changes things. Divorce changes things. You. Your dreams. Your expectations. Your ability to plan is intercepted by your inability to trust. Your hands-on experience and lessons with a relationship on the rocks leaves behind a bed of gravel. You sift through it to find the pearls of wisdom.

Because my first marriage was like the first chapter in Gardening 101.   What can I take away from my first failure to foster success in my next attempt? I need shade-loving plants in the garden beds, and I have to be careful not to overwater the impatiens baskets. My infant garden taught me the importance of learning from failure.

I’ve been determined to do the same in my relationship with Charming. This weekend, we had an argument (or a discussion, or a disagreement, or whichever word carries a less negative connotation). Despite all my usual efforts to maintain the demeanor of a sweet, charming female counterpart, I got mad and lost my temper.

I turned red, but it wasn’t from anger. That momentary glitch where my mouth opened and words bubbled out that I could get back in? It was an hourglass minute, where I could practically pick out the grains of sand. I felt every second. Embarrassment flushed me immediately, and I tried to hide my face from him. The monster got out.

I pride myself on the new leaf I turned over when I started writing again. My aim is to be authentic, genuine, and real. In my defense, I warned Charming about my temper, first cited in throw-down-on-the-floor-kicking-and-screaming bouts at age two. Still, I’d been intentional about hiding this less-than-flattering side of me.

It was out. The burst of anger was intercepted by embarrassment that sharpened into fear. I expect some things to thrive and some things to die in my garden. But in my life, I expect the worst. Tears were dripping down the front of my shirt before I even realized I was crying.

I know the worst in me better than anyone else, and I sometimes have a difficult time loving myself.   I was waiting, in that hourglass minute, for Charming to come to his senses and get out while he still could. I was suddenly aware that I had starting making plans with him, little ones true, but ones that I would miss.

He intercepted all the emotions and simply geared the conversation into a strategy session for how to play on the same team when we have a disagreement in the future.   He always seems to surpass my expectations.

And perhaps it’s because divorce changed me. My American Dream is for a family of my own, but I’ve had enough coursework to learn that it’s not promised or guaranteed. When I toiled in the soil, I uncovered nuggets of wisdom. When I sorted in the gravel, I uncovered some pearls. Some things will die and some things will thrive.

But it takes guts and gumption. And sometimes with all that emotion tied up in hard work and determination, the worst of us creeps out. I worry about the impatient Magnolia blossoms sneaking out before their time. Will they be killed in the next March frost? I worried my temper sneaking out might have killed my budding romance.

For me, it was character failure. That’s a lesson. Charming must believe in the importance of learning from failures, too, because he turned that hourglass minute of emotional turmoil it into another inspired moment of Writer’s Growth.