Seven years ago on Valentine’s Day, I got engaged. After a very public proposal, I learned my father was not first asked for permission; I defended my fiancé. My wedding dress was the first one I tried on (I knew what I wanted in those days). Now, the wedding photographs I cherish are the ones in that gown with Dad, before and during our walk down the aisle and as we danced later at the reception. 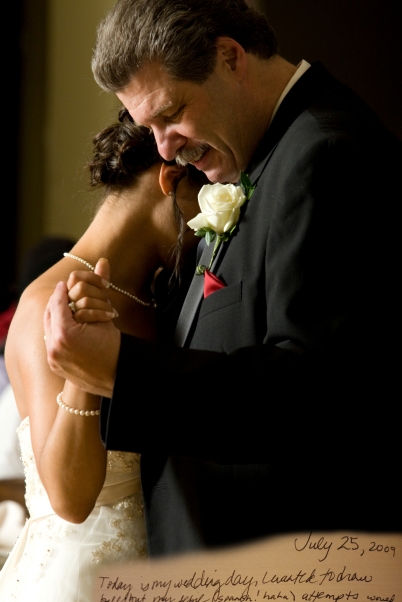 It is not particularly easy to write about one’s wedding when he or she has since divorced. Yet, with this past weekend spent helping Angel find the perfect dress for her upcoming nuptials and the weekend before attending a wedding for a childhood friend of Charming’s, my gaze is directly pointed toward my own failed union’s conception.

Add to it the half dozen women in my life who are experiencing intense brokenness in their marriages, most of whom are weighing the option of divorce, and I cannot help but feel obligated to spend a little productive time wading in a murky time portal. We were all in Angel’s place at one time, standing before a mirror and friends saying, “Yes to the dress”. In fact, so was Angel, more than a decade ago.

And all of us remember the first time we said, “I do,” and promised to love and cherish one another in good times and bad ‘til death do us part. When Angel, in veil and chosen gown, turned to face me, the bridal shop disappeared. My English gene kicked into full imaginative gear and I saw her walking down the aisle to her fiancé. She was beautiful, which warranted a few well-wishing tears.

It was then that I remembered my own wedding day joy, long since hidden by years of nothing changing and everything changing at the same time. I’ve often been prompted, “But you were happy with him at one point, right?” As if it should be obvious. Maybe it should be, but there’s a foggy haze extending backward with my gaze between now and then. It’s logical. We must have been. We were. We were.

I didn’t have to conjure up anything. Seeing Angel in that veil, glowing much as she will on her wedding day, kick-started the emotions in my memories. I was determined to marry that man. I rejected good counsel. I ignored my own family’s reservations. I put on that dress on July 25, 2009, and I married a man I loved, without any regard for the potential of the verb to ever change into past tense.

No one could have told me that I would abandon my marriage vows just four years later. My smile in those pictures was genuine. Maybe that’s why I can’t look at the rest of the wedding album. How could it all have changed so much? How did I let it get from, “I do,” to “Goodbye.”? How could I have so passionately vowed my always and forever and so assuredly believed that’s how it would be… and later change my mind?

It wasn’t flippantly. It wasn’t spontaneous or instantaneous. Over time, love and respect became words with little value. I hear myself in the voices of my friends who are experiencing true suffering. My heart breaks with the stories of their own blissful unions, now toxic and broken. Before my divorce, before I packed my wedding dress in a tub of costumes, I wouldn’t have considered divorce an option.

And so, before, I wouldn’t have empathized with their plights. Making life-altering choices with little confidence that they will find peace on either path. Wrestling with vows of conscience and broken promises. Trying unsuccessfully to fan away the shroud of foggy haze extending backward over the life of the marriage. Rationalizing and justifying to keep sanity within reach.

Though we share the process, the circumstances in each of our marriages are unique. No matter how much sage advice I sought during my process, the decision to stay or leave was mine. I had to make it, own it, stick to it, and ultimately never look back.

I’m still waiting for Disney to make Snow White: The Sequel. Give us a real life fairy tale, where Snow White stares into the adoring eyes of an alcoholic prince. The target audience might shift, but I could better appreciate that plot now than the ones that end in wedding bells. Let her make choices and wrestle and rationalize. Let her stay or go in the end, and it would be cathartic nevertheless.

Because that is real. When mired in the dark fog where true joy seems but a distant memory, our fears and our dreams come face-to-face in an epic battle. Countless couples find themselves here. Some choose to work through it and others to start over. All start with making a change.

When I talk with my grown-up friends, like Sleeping Beauty and Ariel, that’s what I emphasize. Change something, or nothing will ever change. Whether it’s counseling, trial separation, or a spiritual makeover, change something… and by doing so, choose to fight your way out of the fog until you can see clearly.

Grace means that God extends undeserved favor. I do not deserve blessings any more than I deserve suffering. Any portion of joy is a portion of grace. Blessing and suffering are inherently juxtaposed, reminding us subtly of our humanity. In A Grace Disguised, after Gerald L. Sittser recounts his own tragic story of loss, he writes:

“I would prefer to take my chances living in a universe in which I get what I do not deserve… That means that I will suffer loss, as I already have, but it also means I will receive mercy… I will have to endure the bad I do not deserve; I will also get the good I do not deserve. I dread experiencing undeserved pain, but it is worth it to me if I can also experience undeserved grace.”

My father models God’s grace in a tangible way. He’s never stopped pulling me into a loving embrace that is safe and secure and forgives all wrongs that came before. I may never fully understand how I let it get from “I do,” to “Goodbye”. No one could have told me then. My smile was real.  My father danced with me anyway.

What matters most is not the choice I made, but that after it was made, God’s grace followed. He forgave all wrongs that came before. And you couldn’t have told me then, but one day I’d have a real smile again, too.