Over the course of the last week, my evening glories have grown tiny clusters of buds yet to open and greet the porch with bursts of color anxiously awaited. Anxiety can be attributed to a variety of causes; in this case, a harmless excitement. It also stirs inside us when we’re out of our element or not at peace. Though we recognize its presence immediately, with its tendency to tap our feet or fingers repeatedly, it’s often difficult to explain away… like on my fourth date with my eHarmony nuclear engineer this weekend.

My evening glories out-climbed the limits of the porch slats and continued to climb themselves downwards and upwards and sideways.   I could have cut them back, but the emergence of the buds gave me pause. Having witnessed their resilience after being un-coiled and rewound for the painting of the porch, I chose an option that would allow them to keep climbing but potentially damage the plant. After using pushpins and copper wire to extend their playground up the sides and middle of the porch, I cautiously began the task of unwinding vines from vines.

Like so many pursuits that seem simple in the planning stage, the endeavor was more complicated than I anticipated. I use the term “complicated” when exploring the relationships between roots and prefixes with my English students. The prefix “com” means together. The derivative of the Latin root “plicare” means folded.   The evening glories became the epitome of the language combination personified, with vines so folded together in multiples that it was impossible not to inflict wounds. Some vines were broken accidently, others intentionally, but belief in the fortitude of the plant’s will to thrive coupled with the promise of the buds that will open soon forced my hands to task completion. 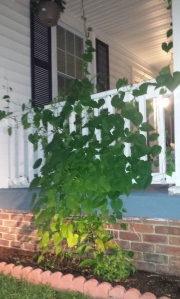 Witnessing the finished product, my friends Angela and Kyle agreed it was the right move. Angela had, after all, suggested it, and Kyle offered that he fully expected I would do that eventually.   Though it pained me to throw away the leaves and vines fractured in the process, looking beside me now at those clusters of buds headed in an upward direction satisfies the anxiety of the injuries born with a restored hope.

On my most recent date this weekend, I still couldn’t shake the unsettling feeling in the pit of my stomach. I greeted him with an almost familiar hug when he picked me up and laughed at our amateur bowling skills. We met up with Angela while walking by the marina, and she gave me her stamp of approval. Still, there was that same anxiousness somewhere inside me as I had on the previous date, an anxiety I had explained away as me putting too much pressure on the budding romance. While cooking our dinner, I drank a glass of wine quickly in a wholehearted effort to relax and get out of my own way.

He is, after all, a great guy. He meets the criteria on my uncompromisable-qualities-for-my-future-husband checklist. He is intelligent, ambitious, conversational, and as Angela agreed, “nice to look at” too. Either the wine hit me sooner than expected or my clumsy disposition prevailed because I burned my forearm badly while checking the temperature of the chicken in the oven. Dinner was pleasant, despite the ebbing pain, and I thought I was ready for the goodbye at the door. But mid-kiss, the urge to tap my toes was still present. It wasn’t a harmless excitement. Something just wasn’t right.

After taking some time to process my reaction to the first kiss, I knew that I had options. I could try for one more date… but hadn’t I already done that? And when had I ever needed a drink to kiss a good-looking, quality man before? Maybe I’m not ready to date again yet.   Maybe he just wasn’t the right fit for me. Maybe a lot of things. I can’t explain away the anxiety, but I can identify its presence, and I know just enough to pay attention to it. Our courtship ended amicably, as he was both understanding and kind when I spoke with him.

In essence, what I am doing in my own life is much like the redirecting process I’m doing with my evening glories. Having seen my resilience after my own heartbreaks, I’ve chosen the path with the best hope for upward growth despite the risks. The evening glories have buds, but they haven’t bloomed yet. Had I left the vines to their own intertwining efforts, the buds might have blossomed, but the plant itself had already outgrown its current environment. Its future was doomed. Intervention was necessary. The promise of exponential future growth outweighed the promise of a few buds yet to open.

It’s complicated. My desires for a husband, my online dating, my checklist, my biological clock… all folded together. Unraveling the vines causes some damage, and in this case, I snipped the budding romance intentionally. Because I have a vision for what will be. I see the climbing vines reaching above the railing, growing beyond to intermingle with the hanging baskets of impatiens. When things get complicated, sometimes you just have to go about the task of untangling what you can to answer that unexplainable anxiety and focus on the plan. The vision.

So that’s what I’m doing. I want love to blossom. I want forever and always. I want children. I want a front porch swing to share with a husband and watch, from its perch, our children and grandchildren grow. I might not be ready to fall in love again yet. I might not have met the right guy yet. I might… a lot of things. I can’t explain the anxiety, but I wasn’t at ease on my most recent pursuit of the dream. He met my all my checklist criteria? Well, perhaps I need to add an item: In his presence, I’m at peace.

My mother asked me if there were any other potentials on eHarmony, but I haven’t looked in weeks. It will take my evening glories some time to recover from the trauma I inflicted on them. In a few days, water and sun will replenish the nutrients flowing through the vines, and invigorated, they will take hold of the copper wires and grow upward.

It will take me some time to recover, too. But it was the resilience that the evening glories demonstrated that gave me faith that they would thrive beyond the stress of the experience, and I’ve witnessed that same resilience in myself. By uncomplicating present circumstances, we might be left with some severed leaves and vines. We might not see immediate progress.

But we can still defend the choice. That stirring of anxiety beneath the skin is a signal that something isn’t right. And when logic, science, and pensive meanderings can’t explain it away, it’s best to heed the warning.

No, I can’t be 100% certain that the vines will keep growing and the buds will blossom, but even a 99% belief powered by hope and faith is preferred to the anxiety that I no longer feel.