My sister-in-law asked me tonight how long I sit on my front porch before I think of something to write about. I’ll let that preposition end a sentence for affect and assert that I just begin writing. Most often it’s a sight that strikes a chord of inspiration, like the enormous tree stump out back, the magnolia trees in the front, or the azaleas in my garden. Tonight it’s both the hanging plants. 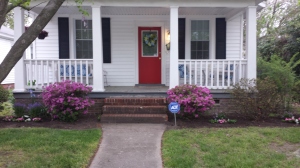 Throughout the week past, I have attempted to nurse the failing one back to life, and only a few blossoms remain. The one that was thriving is now beginning to wilt. When I purchased the baskets at Home Depot, I noted the tag that read, “Full sun.” I remember trying to imagine my porch at different times of day and realized that I’m not normally home during daylight hours long enough to know if the porch receives full sunlight. The purple and pink blooms would be the perfect color complement, I thought, and rather distractedly dismissed the instructions, consumed instead with a mental picture of this preferred arrangement gracing my writing corner.

I continued to shelve the dismissed tag each time over the past month that I returned home to a well-shaded front yard. My magnolias are heavy with healthy, thick, green leaves which my impatiens appreciate. Now familiar with their life cycle, I have no concern for the azaleas, each bush blooming and fading in two weeks’ time, alternating bursts of color with green, though I find the color more pleasing. I mourned my magnolias’ blossoms briefly before accepting something vibrant to look forward to in a year’s time. I even grieved for the great oak until its wood had been put to purpose once again as firewood.

Each wonder of nature is unique in its needs. While my plants share the basic requirement of light and water, the amount of need varies among them. As I type, I feel the presence of this wilting arrangement hanging over my head. I look back and forth between it and the laptop screen. It taunts me with its undernourished stems rocking in the wind. It no longer dances to the tune of my wind chimes, but practically cries out, “Why didn’t you pay attention to the tag, Laura Joy?”

Because I was falling in love with the colors. Because I was dreaming of the way it would fit into my big I porch picture. Because at the store, it was flourishing and inviting and thriving.

And though I can try to convince myself these are valid excuses, I must take responsibility for condemning the hanging plants to failure for the most logical reason: because I am an inexperienced gardener. Their description was in bold print on their tags. “Full sun.” I dismissed the flower’s most basic need requirement, hoping that despite the lack of sunlight, they would remain as flourishing and inviting and thriving at home on my front porch.

Essentially, I did the same thing with my ex-husband. When we first met, he was just as inviting. I could barely sit still for a church service, but I could watch him recording in the studio for hours, enamored with his voice and songwriting talent. On the mic, his colors were magnificent. Though he came without a tag of bold print warnings, his non-existent job or bank account might well have served the same purpose. He needed only his music to survive and thrive. My big picture dreams were of marriage and a family, and it was a logical next step for us after five years together. The decision to marry me came with the shift from late nights in the studio to a nine-to-five office gig. Eventually, he stopped making music altogether. After four years of marriage, he was neither flourishing nor inviting nor thriving.

In our last argument in our bedroom before I left him, he told me that I had castrated him. Always the wordsmith, this dual-purpose admission and conviction struck a chord as intended. I had not asked him to give up his music for a career, but that was what he had done. Looking back now, he might as well have been crying out, “Why didn’t you pay attention to the tag, Laura Joy?”

Each wonder of nature has unique needs. While humanity shares the basic requirement of food and water, the inherent variation of a multitude of other needs defines our complex, higher-ordered existence. I could answer that I was falling in love with his colors or dreaming of how he fit into my big picture or how he was flourishing and inviting and thriving when I met him. But I must take responsibility for condemning him to failure for the most logical reason: because I was an inexperienced woman. I did not spite my hanging plants when I bought them, nor did I spite him when I chose him to be my husband. I had childlike hope that defied basic need.

During our divorce, my mind fixated on those needs of mine that were not met. Not until tonight did I understand why that argument in our bedroom was our last, why he did not fight for me, why he did not contest the divorce, why he never asked me to come back. I can move my hanging plants from place to place in a shaded yard, but they aren’t ever going to flourish here.

I believe it is not ill will or spite but rather good intentions and hope that create a formula for the great losses in life, the kind we regret and grieve and weep over. I’ll let that preposition end a sentence for affect yet again.   We could role reverse my analogy and weave another ill-fated tale of a girl once thriving seen to wilt and decline where her needs for security and protection were dismissed in favor of a pedestal wife, but the lesson would be the same.

I sat in my driveway tonight for a few moments thinking about what to do about the hanging plants, strongly considering trashing them. Now, though I plan to replace them with plants whose tags read, “Shade,” I realize that this divorce is a kindness. With the oak tree having fallen to internal demise of rotted core, the backyard is now full of sunlight. They might yet find themselves thriving again back there. While I will no longer get to appreciate their color and vibrancy above me on writing nights, facing the reality of their wilted blooms after only few weeks is a big improvement over four years.

Divorce was a kindness for my ex-husband if he has music in his life again. I hope that somewhere in Nashville, he is flourishing and inviting and thriving again. Soren Kierkegaard once said, “Life can only be understood backwards; but it must be lived forwards.” Tonight, I make a silent promise to my former husband and the hanging plants that, moving forward, I will pay attention to the tags.