Writing nights don’t beckon me like they used to.  The ache to arrange words that manipulate my mind to self-discover still tempts me to settle back into this front porch cushion like 187 Tuesdays before; I’m just guarded, I suppose, and writing is most natural for me when I don’t have to avoid topics.  There’s a lot I can’t write about these days, though I estimate this challenge of balancing a respect for others’ privacy and a commitment to write authentically is not unique to me.

I get to write my story.  I own my thoughts and ideas.  I use a machine to transfer those ideas to a computer in the form of carefully arranged words and phrases, syntactically pleasing and wrought from repetitive practice.  I broadcast the product over the internet, and some keep flipping channels while others tune in.  From their unique corners of the world, my story takes on new lives as each reader brings his or her perception and personal application.  My most broken moments have been the fodder for my most popular blog posts.  When I stopped recognizing the names of new followers, I felt legitimized as a blogger; people relate to the real moments – the raw messiness of human relationships.

So, this reticence to sit still for a couple of hours and initiate this transfer of ideas shouldn’t surprise me.  I’m bound by obligation and plain good sense to avoid publicly writing about certain things.  Composing here centers me in a way little else does.  A lazy beach day at Fort Monroe is a strong competitor, but even the endorphin release of a sweaty session with the elliptical doesn’t reinvigorate my spirit like three and a half years dating this white wicker love seat.

There is this undercurrent narrative, concealed beneath weekly confessionals, that’s begging for time, pretense, feelings, and circumstances to realign and let it rise to the surface.  I’ve been told my most recent life experiences would make for a great novel, but it’s not a quality read or entertainment value that urges me to face my personal demons with an audience looking on.  When I write, I grow.  The things I can’t put on the page weigh on me daily, shelved out of reach as I go through the motions, but always there, neglected during Tuesday night writing binges to maintain status quo.

And the simple existence of things I can’t blog about serves as a giant red flag that reminds me how far from perfect I’ll ever be.  I’m learning to be okay with that, it’s just not happening out here.  The kitchen still greets me warmly, I’ve discovered it’s as solid a life instructor as the garden beds were.  This weekend, I was craving triple berry pie, so I searched online for a few recipes to satisfy my sweet tooth.  The first pie I made from scratch a few weeks ago was good.  I didn’t expect it to be perfect.  It was my first pie.  Maybe I expect perfection because I’m in my mid-thirties and I shouldn’t need to follow a recipe to get things right.

No, the first pie wasn’t going to be as good as this one because I didn’t know a month ago what I know now.  I could marry three recipes for the filling with confidence and substitute a lattice crust so I could tackle working with dough again.  As I prepared the ingredients, I was pleased at how functional my kitchen has become.  There was free counter space if I needed to set something down.  My most used tools and spices were within arm’s reach.  I don’t expect myself to be perfect in the kitchen, and after six months courting the hobby, I don’t expect anyone to be.  In fact, I dare say that I wouldn’t want them to be.  Missteps and stumbles in the kitchen have resulted in some of my favorite mostly-original dishes.

I’d like to see success in my attempts to follow a recipe, but missteps beyond the kitchen walls yield consequences and injury more critical than charred chicken.  I’m stunting myself by storing up secrets, accepting the necessary chains that encompass me like two commas encasing an appositive phrase when the meaning of the sentence would utterly change where they eliminated.  There was a basic recipe that kept me sane.  I lived and made choices, then I reflected and blogged, then I realized and grew.  I progressed through the levels of Bloom’s Taxonomy somewhat out of sequence, but I grew.

This is not to say that I’m not growing now, it’s just much of the current growth I’m making isn’t measured by events, adventures, or bucket list achievements.  It’s more subtle, like the moon flower climbing up my front porch slats toward the roof that I didn’t plant this year.  It grew anyway, trained itself upward, climbed the fishing line I strung last summer, and bloomed for me last night though I never tamed or watered it.  It was just there, this white blossom that evidences one season of neglect couldn’t eradicate two years of tending the soil.

There isn’t one thing I can point out that made this triple berry pie superior to the first.  There’s a cumulative curve I’m working with, application of a collection of tips and tricks incorporated from other recipes.  I’ve relied on internet sources as much for cooking with what’s in my cabinets in the last two months as I did during two years of grad school.  If we assessed my pie based on a grading rubric like my graduate course work, it might not score well because it deviates from the recipe, but it’s the best triple berry pie I’ve had in years.  Cultural norms enforce similar grading rubrics.   I tend to score better when measured with category weights rather than holistically, these days.

When I write I grow, but I grew in the garden and I grow in the kitchen.  I’m finding new ways to process the latent storms, and all the ways I am not perfect seem to point to specific tweaks and modifications that, collectively, can still turn this creation into something good and pleasing like this triple berry pie in a pan, half full. 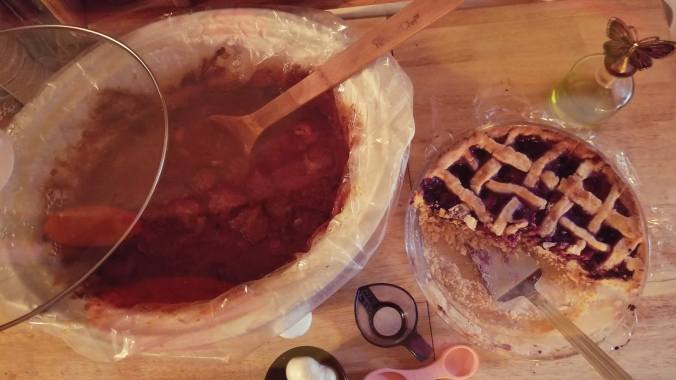