There were no fireworks tonight.  Well, there were.  There are.  I just can’t see them.  Thursday, I was in Italy.  Friday, I was in Hampton.  Saturday, Crisfield, MD.  Sunday, Alexandria, VA.  Yesterday, Silver Spring, MD. Now, finally I’m writing on my front porch, later than usual as we tried to catch the fireworks at Fort Monroe after a long drive, settling for mere bursts in the rear view mirror as we drove home instead.  Now, they sound continually all around me, noise without the enchanting reward.

Home. After Italy, it still feels like home.  The last time I left home for more than a week at a time it was to visit my family in Syracuse then return to Nashville by Christmas Eve.  That time, it didn’t feel like home; it smelled like another life.  I had feared my new roommate, Charming’s cat, might alter the typical wave of fragranced air, but a familiar fresh scent greeted me.

Home.  The country of my ancestors embraced me as somehow familiar, as though absent custom made, Capri sandals and Italian soil, I hadn’t fully known myself at all.  In the Bay of Naples, it was as though I could own certain aspects of myself that are oft shielded on the Eastern Shore of the Atlantic.

Yet, I hadn’t been back from my educational tour of Italy with my students for sixteen hours and we were headed straight there.  After twelve days apart, we were looking forward to a romantic getaway up the Chesapeake.  Charming had made reservations at a bed and breakfast near Smith Island.  With my handful of waking hours, I washed clothes, made calls to my summer school students, repacked my suitcase, snuck in a visit with my brother’s family and a workout with Chuck, and headed down to Charming’s temporary abode for the summer while he’s taking a class in Norfolk.

It made sense to leave from there, so I dismissed the donut still adorning my Honda Fit from the unfortunate flat at church the day before I left for Italy, and I kept the speedometer under 55 mph through the Hampton Roads Bridge Tunnel, not a difficult task during rush hour.  We transferred luggage to his car then set off for our weekend away.  The beauty of the Chesapeake Bay Bridge Tunnel was lost on me, commiserate to the twenty-eight hours awake while returning, jet-lagged and exhausted.

We arrived at the B&B well past 10 pm to find a party in the living room.  We double checked.  We were in the right place.  We set our bags down at the door.  Charming poked his head into the room.  We were greeted by a Greek woman with hugs and platitudes, handed thick slices of chocolate cake and glasses of Lambrusco, and we gathered this was the owner’s seventieth birthday; she was celebrating with all the weekend guests.

It wasn’t the weekend we were hoping for, that romantic getaway after time apart to rejuvenate and reconnect.  Still, on the heels of Italy, I was entertaining this optimistic worldview where incorporating the interruptions and unexpected turns leads somewhere worthwhile. I said, “Saluti,” and drank up.   We hadn’t been sitting with the impromptu party goers five minutes before one asked why we weren’t married.

In Italy, I met a lot of people: those on our trip, our guides and driver, and locals along the way.  In English or Italian, the question about marital status is equally imbedded in introductions after the age twenty.  I tired quickly of that very question, posed the same way oceans apart, only with Charming sitting next to me, none of the quip retorts would come out.  Or maybe it was the jet-lag or exhaustion or the wine or a sugar coma.  Maybe it was all of it.

This was one of the ways in which I felt I was more myself in Italy.  I didn’t have to be a single woman in her mid-thirties without children.  I was a teacher and a traveler.  For a week and a half, I largely escaped from my own self-imposed prison of perceived loss.  I found it easy to maneuver away from questions about Charming and children in both languages. I didn’t want to waste any moments in Italy on worry or doubt.

On Saturday morning, we contemplated but appropriately dismissed a nap after our first breakfast at the inn.  The constant conversation, facilitated by our hostess with a most personal attentiveness, drained me of the tiny energy reserve I’d accrued in the hours after our arrival.  But I’d made the most of Italy on a similar lack of sleep, and I was determined to maintain that commitment to adventure.

We snapped pictures on the ferry to Smith Island, took an hour self-guided golf cart tour around the island so small we needed only half that time, enjoyed a slice of Smith Island Cake, and made it back in time for Charming to take a nap before the Freedom Fest, Crisfield’s Fourth of July Celebration.  While he caught a few winks, I looked through our pictures.  I was surprised to find I liked the way I looked in most of them.  Unusual.  I lost another six pounds in Italy, nineteen pounds total since March.

I ate so well in Italy, pastas and pizzas of every genre.  How did I do it? Five to eight miles of walking, maybe, but I think it’s about what I did differently, ejected from my daily routine.  I had a light breakfast every day.  I drank tons of water.  I didn’t eat after dinner.  Basically, it’s all the things my gym mentor has been repeating like a mantra for over a year.  When I say that I could own different parts of myself in Italy, part of that was discovering a willingness to be flexible, to adapt for best survival.  My weight has been a battle since I hit thirty, yet it took only a week in a foreign country to see the wisdom in Chuck’s words and smite my stubborn pride, habits, and routines.

While Charming slept, I slipped out on the front porch for a clove, being careful to put it down when a couple left the inn so as not to encroach on their freedom from secondary smoke.  They left, and I missed Italy, where my pack of cloves, these tiny black cigars, led me to the most interesting conversations with locals I never could have imagined.  In the States, it’s practically a scarlet letter.  There’s no stigma about smoking there, rather it was a social meeting place.  I will remember Andrea and Pasquale and Pepe, random Italians who each taught me something about their regions I wouldn’t have found in a travel guide.  Even my greatest vice, I was able to own in Italy.

We got to see fireworks that night, at least, even if we missed them tonight.  The next morning after we prepared for departure, we exchanged another morning of conversation around the gluten-free breakfast table.  Politics, professions, but no religion.  I miss that most of all, I think.  In Italy, being an Italian-American Protestant was the breeding ground for deep conversation.  I think back to high school, where it was weird to be a born-again Christian, and I marvel at how, on the other side of the world, in a Catholic country, my unique faith was contrarily celebrated. 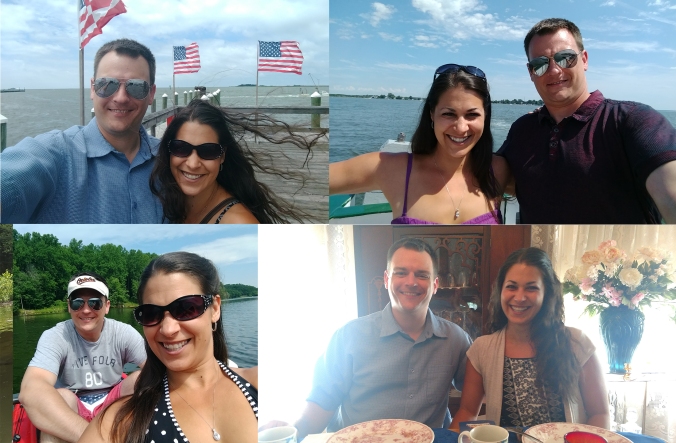 Our weekend concluded at Charming’s in Alexandria for a night, then we began the holiday festivities with a barbecue with some friends in Silver Springs Monday, spent the night with his family, enjoyed our freedom on the lake this morning, and afterward visited his grandma for lunch.  When we drove back to Norfolk and found my car, I had another flat tire.  I may have cussed, I’ll admit, but I was laughing as I did.

Because things just happen.  The unexpected happens.  And sometimes you don’t really know what’s best for you until you let go and let life.  For me, that’s letting go to God, too.  Our weekend wasn’t what we planned, but there were countless gifts along the way.  Smith Island Cake, a ferry in Oxford, a winery in St. Michael, and good ole Bugsy’s Pizza in Old Town Sunday night.  Dinner with friends.  Fun and food with family.  A long drive with an inspiring audio book narrating our trip.

Flat tires and talkative hostess happen.  I’ve been clashing a bit with Charming since I got back, and I wonder if it’s not that there’s a part of me that’s different… that I’ve been enticed by the peace and comfort of an existence where you go with the flow.  My roommate in Italy, Jeana, would remind me of that nearly every night after something had gone off kilter with the schedule or infuriating WiFi.

Our tour director from Rome, Stefano, said that Italians work to live, while Americans live to work.  I enjoyed the pace of a life where there was always time to linger over a clove or a coffee with a new Italian friend.  The moments I didn’t plan for in Italy most impacted me.  I owned my womanhood, apart from my absent family, ecstatic to be a teacher traveling with my girls abroad.  I owned my stubbornness, giving Chuck the opening for an I Told You So he didn’t take and lost five pounds in the process.  I owned my faith, unashamed to be a born again Christian and proud of my family’s Waldensian heritage.

The flat tire tonight.  The missed fireworks.  The Greek grandmother I never knew I had.  It’s okay.  I’m okay.  I’m writing at home on my front porch like I’ve done for the past 122 weeks.  And for the first time in a long time, God’s gift of a grand tour of Italy credited, I’m okay with being me.